October 31, 2014 in Other with: Halloween, Nebraska, Omaha, Weekend Wrap-Up

Happy Friday and Happy Halloween!  I don’t know about you, but Halloween has always been one of my favorite holidays.  That of course has nothing to do with the fact that Halloween candy/food is delicious and dressing up in costumes is fun.  Okay, so maybe I am being slightly sarcastic!  Regardless, this Halloween season has already been off to a great start.  When I found out that my friend Molly was having a Roaring 20’s-themed Halloween party at her gorgeous new house, I was super pumped!  I decided not to buy a $50 flapper costume and instead bought the pieces separately for about $28.  I’d say that it was a successful do-it-yourself costume! 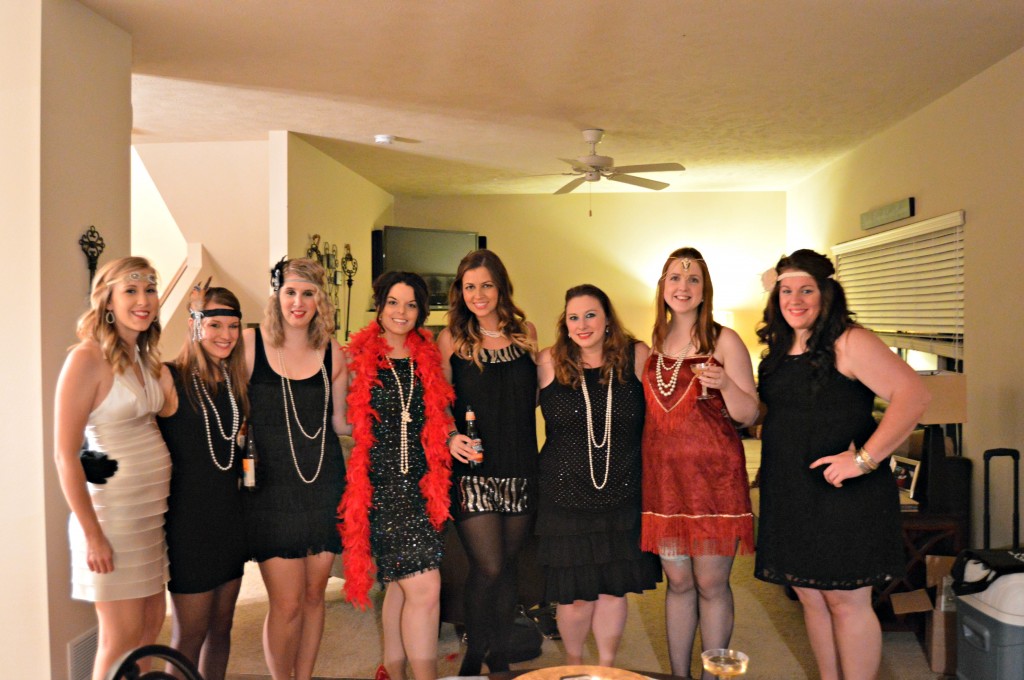 It turns out all you need is a black dress, a strand of pearls, black tights and gloves, and a flapper headband/hat/hair piece and you are all set!  Doesn’t everyone look so good and so very 1920’s?

Note to self: Stand on your tippy toes when you decide to be lazy and wear flats when everyone else is wearing heals.  I am definitely not tall by any means, but I look extra short in this picture. 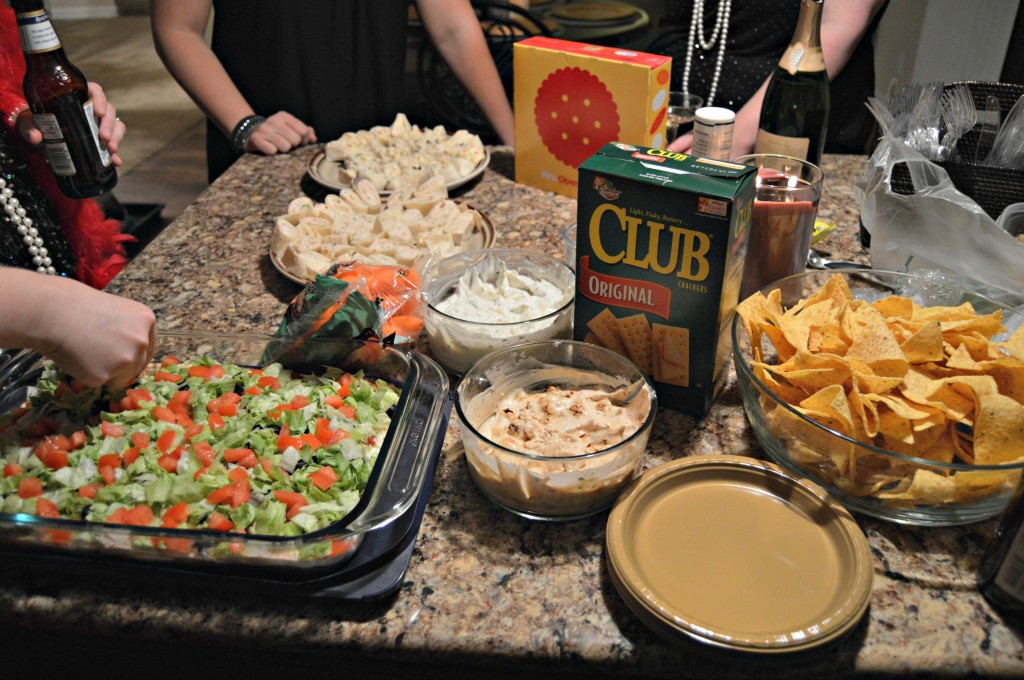 As noted above, it wouldn’t be a Halloween party without delicious food!  I contributed the Mexican 7-Layer Party Dip, which was a huge hit!  I was so happy to leave with a pan that I barely had to clean.  All of the party guests had taken care of the majority of that part for me.  Molly also served a delicious onion dip from the Farmer’s Market and veggie roll-ups.  They were the perfect snack foods. 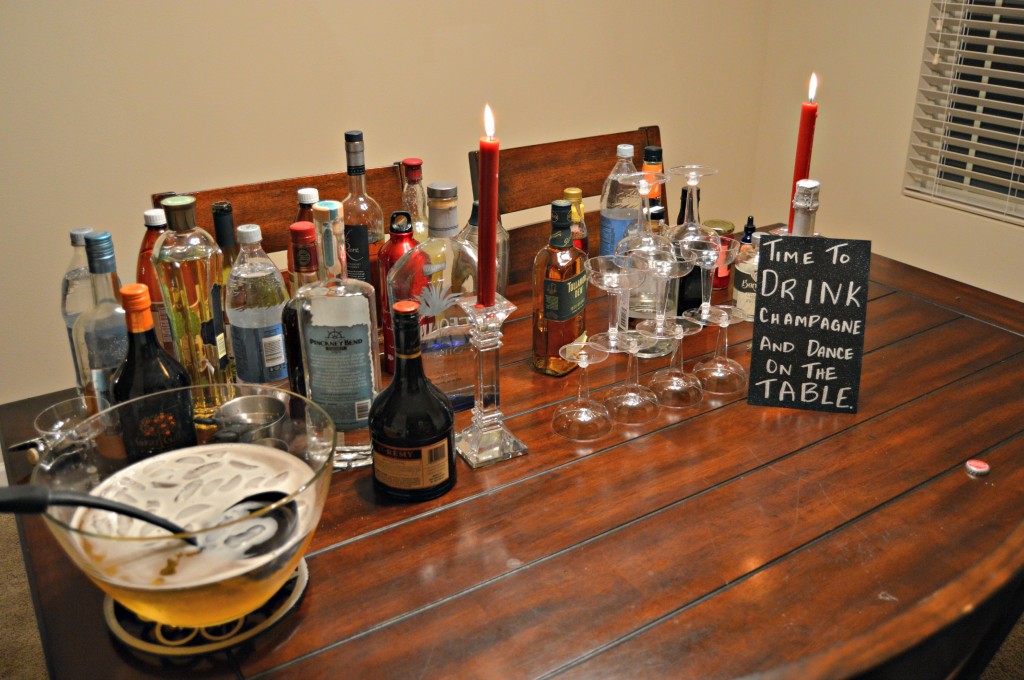 Erin’s husband, Josh, did a fantastic job of turning Molly and Brian’s house into a 1920’s speakeasy.  I’d say there was plenty of alcohol for everyone… and then some. 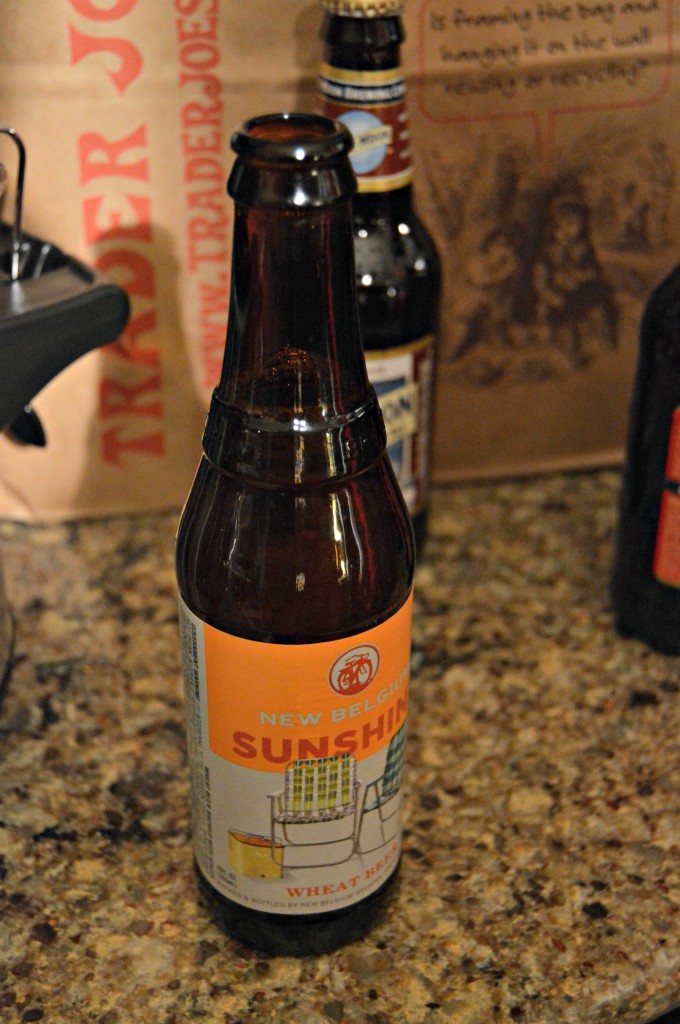 I stuck with beer, and a Summer beer at that!  New Belgium makes awesome beer and I fully support drinking their seasonal beers all year round.  Ever since college ended, I have found that it is a lot smarter for me to stick with the beer and avoid the liquor.  Though I have to admit that I can rarely say no to a margarita or a Rum Chata shot 😉 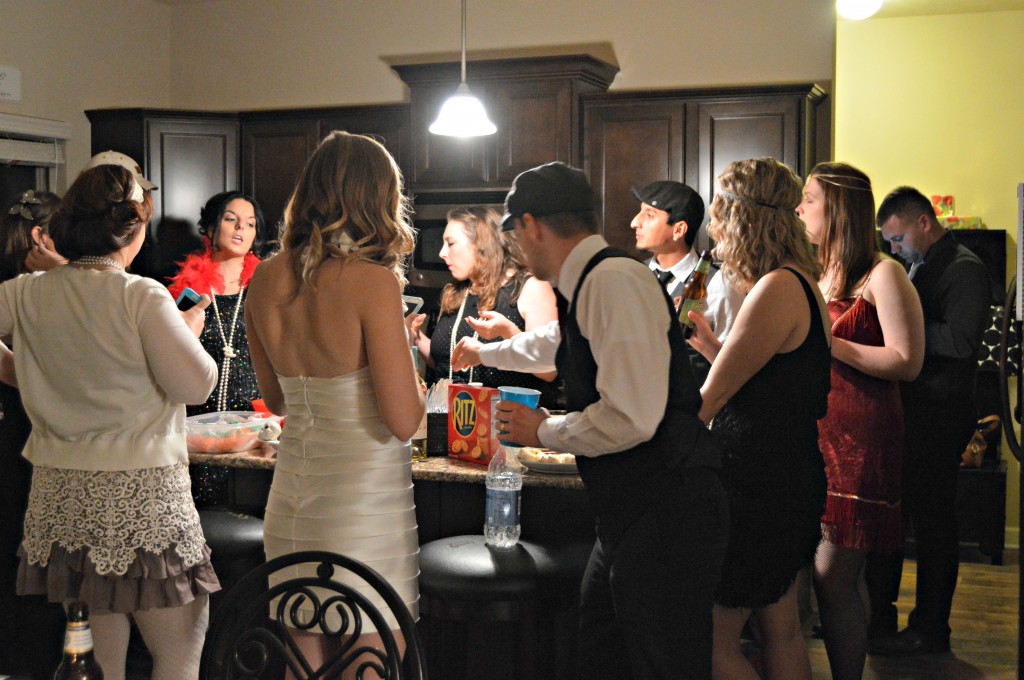 Isn’t it almost inevitable that everyone gathers in the kitchen when food and drinks are involved?  We are no dummies! 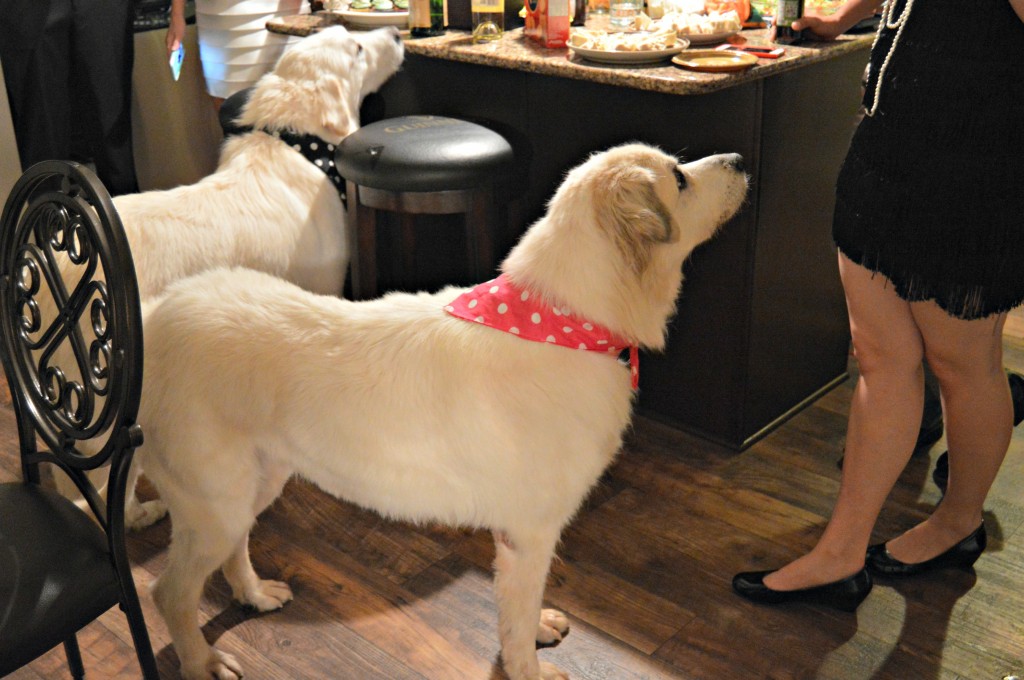 Molly and Brian’s gorgeous dogs wanted to get in on the action, too.  Aren’t they the cutest?  They are ginormous, super soft, and so sweet.  I am fairly certain that they just may have stole the show that evening. 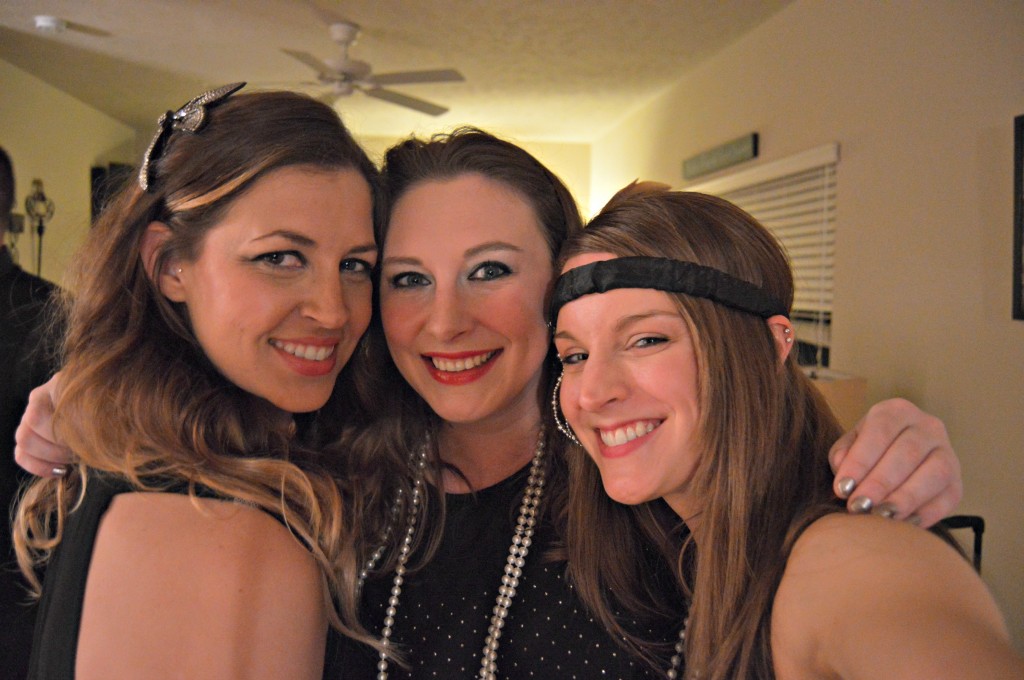 While the couples were all taking pictures, I jumped into the “single girls” picture.  Yes I have a boyfriend, but he was five hours away and I used the excuse that my marital status is technically “single.”  Basically, I just didn’t want to feel left out on the picture taking! 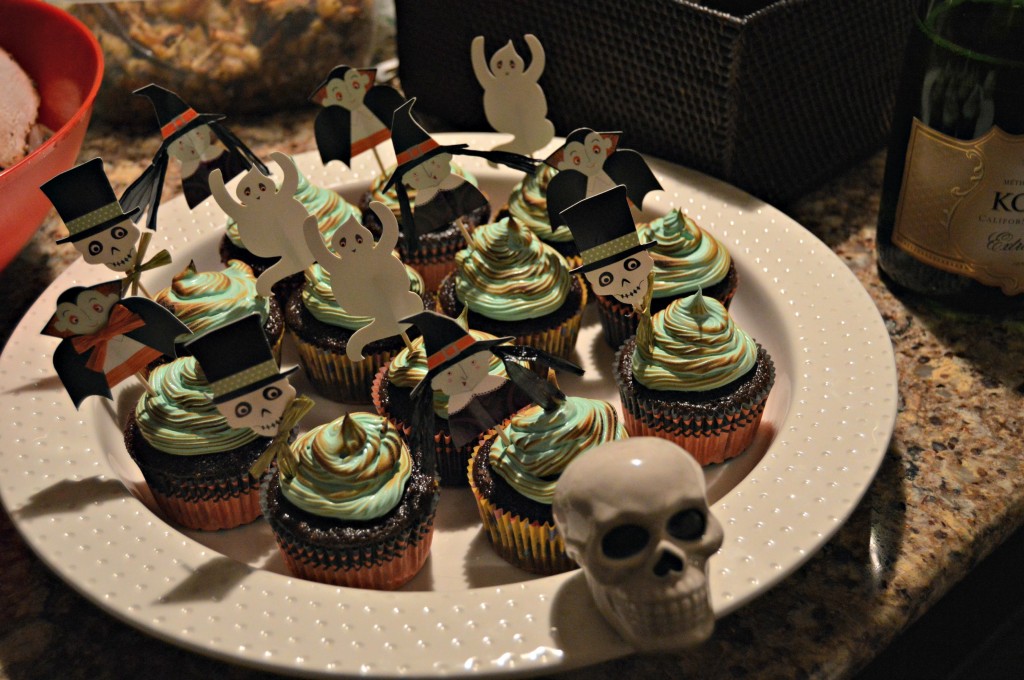 Joanna brought the cutest and most delicious S’mores cupcakes that were perfectly decorated for Halloween.  The graham cracker “crust” on the bottom of the cupcakes was a fun surprise and my favorite part.  Joanna even used a blow torch for the frosting.  I am not kidding when I say that she is an amazing baker! 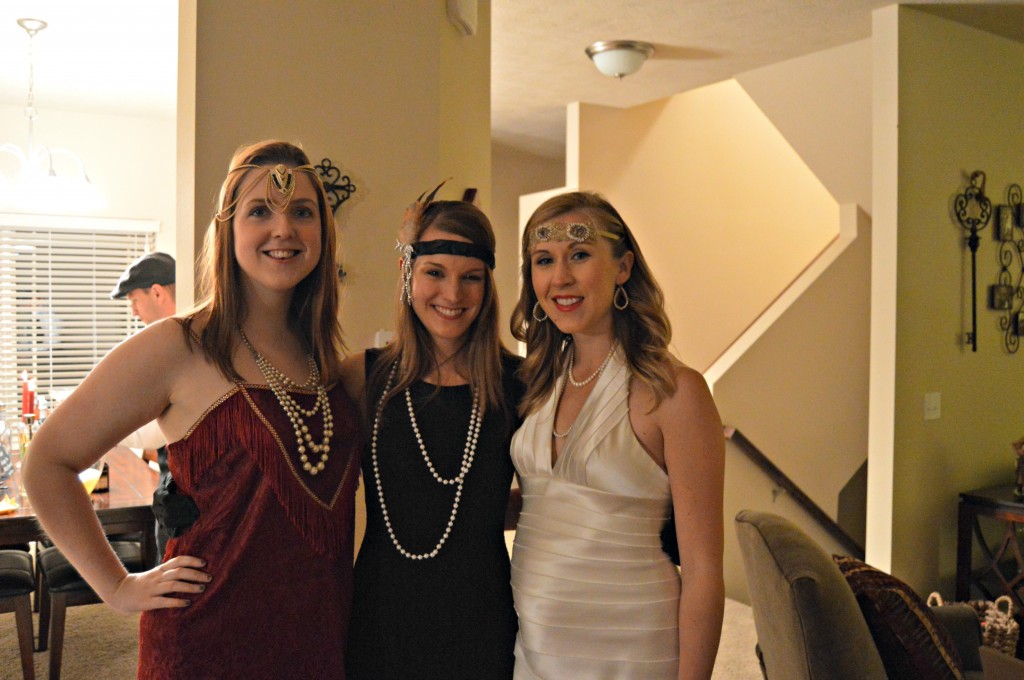 We couldn’t end the night without a picture of the Three Cooks One Kitchen girls.  It is so great to have blogging friends, but it is even better to be able to have friends that are in your life when blogging is the last thing on your mind.  I’d be lost without these two!

All in all it was a wonderful Halloween party that I had a ton of fun at.  Molly and Brian were fabulous hosts and so kind to share their home with all of us.  I ate good, drank even better, and left more in the Halloween spirit than I already was.

The Halloween festivities are continuing today for me at work.  My department has a pretty great (top secret) costume planned out this year, and we are hoping to make up for not placing in the costume contest last year.  I’ll try my best to get a picture to share with you all next week!  And after work, I am heading into a sure-to-be fabulous weekend with Jeremy, my friend Stacy, and her husband, Chris, who are visiting me in Omaha.  We are avoiding the craziness of the bars tonight (that is how you know you are old) and have plans to eat junk food and watch a scary movie.  Nothing says Halloween like eating candy and getting creeped out!