Disclaimer: I do not have Celiac disease and, therefore, was not overly concerned regarding possible cross-contamination when making my selections at the following restaurants.  If you have Celiac disease, I certainly recommend asking the appropriate questions of your server regarding “GF-marked” items.

My fifth and final Colorado recap is coming ‘atcha.  This post features our final day of vacation, which was spent right in the heart of Denver.  There are few places I love more than this city.  And while I could talk forever about how gorgeous Colorado is, I should probably admit that it is also the food that really gets me!

During our entire vacation, I never ever felt like I was missing out because I was eating gluten-free.  Everything was flavorful and delicious, and I always had several options to choose from at each restaurant that we visited.  This particular day in Denver was no different. 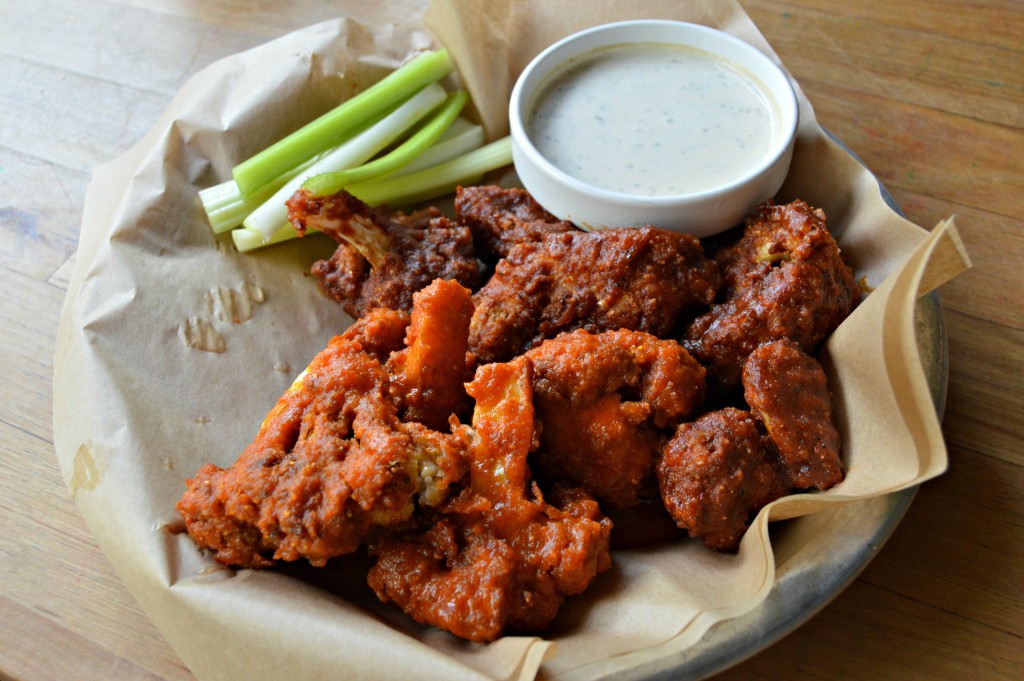 Jeremy and I joined his brother and his girlfriend for lunch at Watercourse Foods, an all vegan restaurant.  The two of us had enjoyed an insanely delicious meal there last summer, so we knew it also had to be a stop this time around.

Last year, Jeremy and I split the Seitan Wings, which were unreal.  Since I am eating gluten-free and could not have seitan, we decided on the Cauliflower Wings instead.  They did not disappoint.  We ordered half with buffalo sauce and half with the Memphis BBQ sauce, which worked perfectly since Jeremy liked the buffalo sauce the best and I liked the BBQ sauce the best.  The ranch dip was also killer, and you could not even tell that it was vegan! 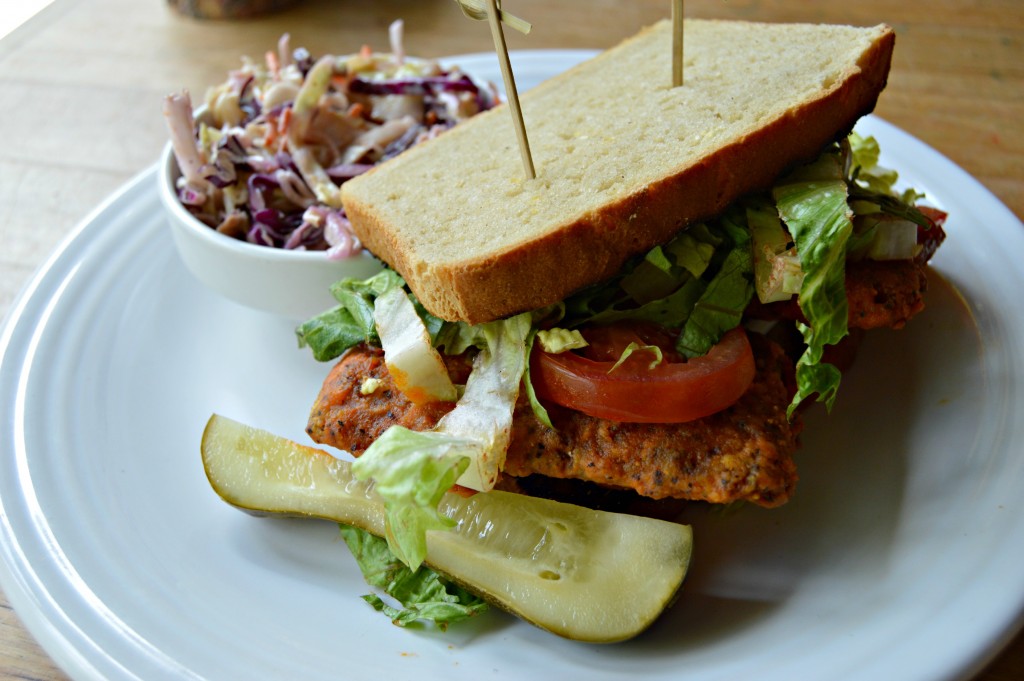 For my entrée, I selected the Buffalo Tempeh Sandwich on gluten-free bread with a side of coleslaw.  It had been forever since I had tempeh (which I love!), so when I confirmed with the waitress that it was gluten-free, I knew I had to get it.  This sandwich was huge, so I only ate half and saved the rest for breakfast the next day on the drive back.  I certainly was not letting that yumminess go to waste!  The coleslaw, which I remembered liking last year, was not the best thing ever.  Next time I would definitely pick something else. 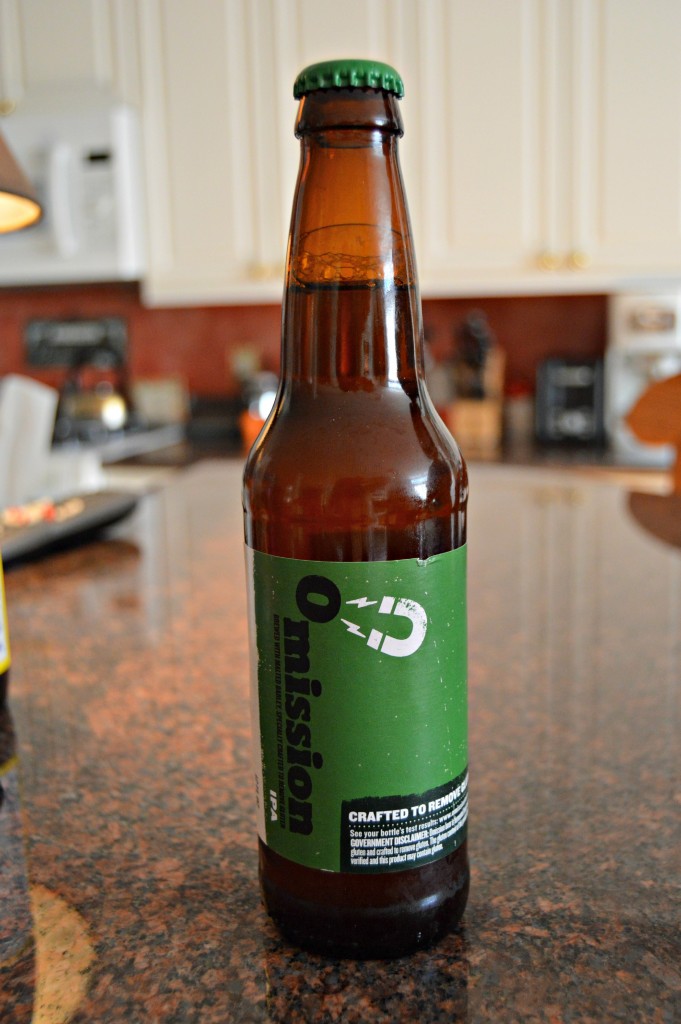 Jeremy and I had a relaxing last afternoon after lunch.  We each had a beer- gluten-reduced for me!  Of all of the Omission beers, the IPA is definitely my favorite. 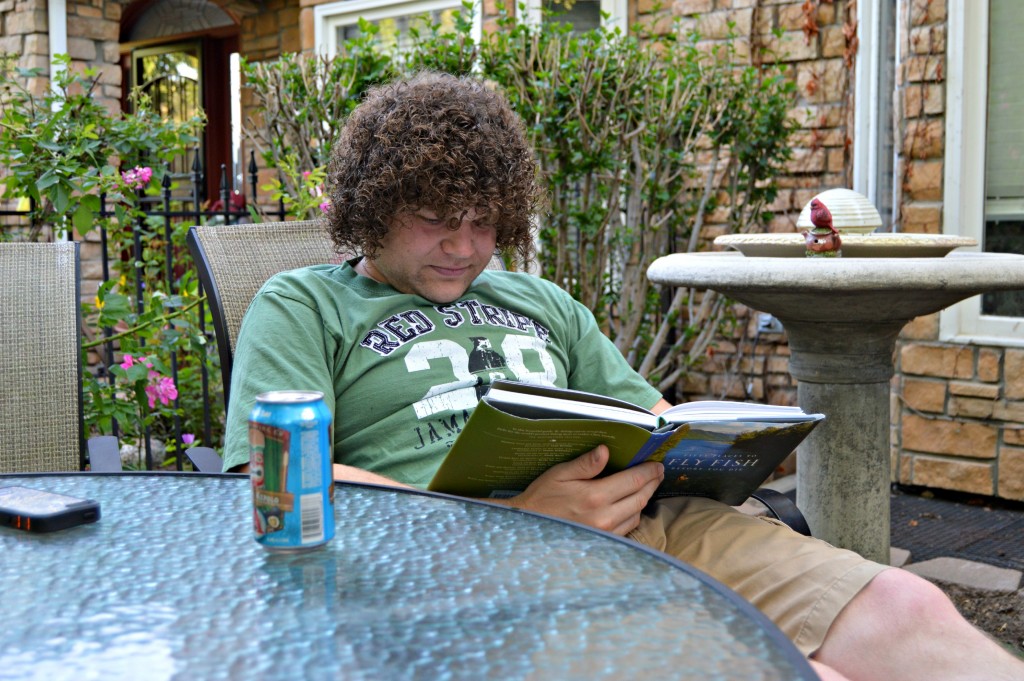 We spent as much of our afternoon as possible on Jeremy’s aunt and uncle’s front patio.  It is absolutely gorgeous, and we always find an excuse to be out there as often as possible whenever we are visiting. 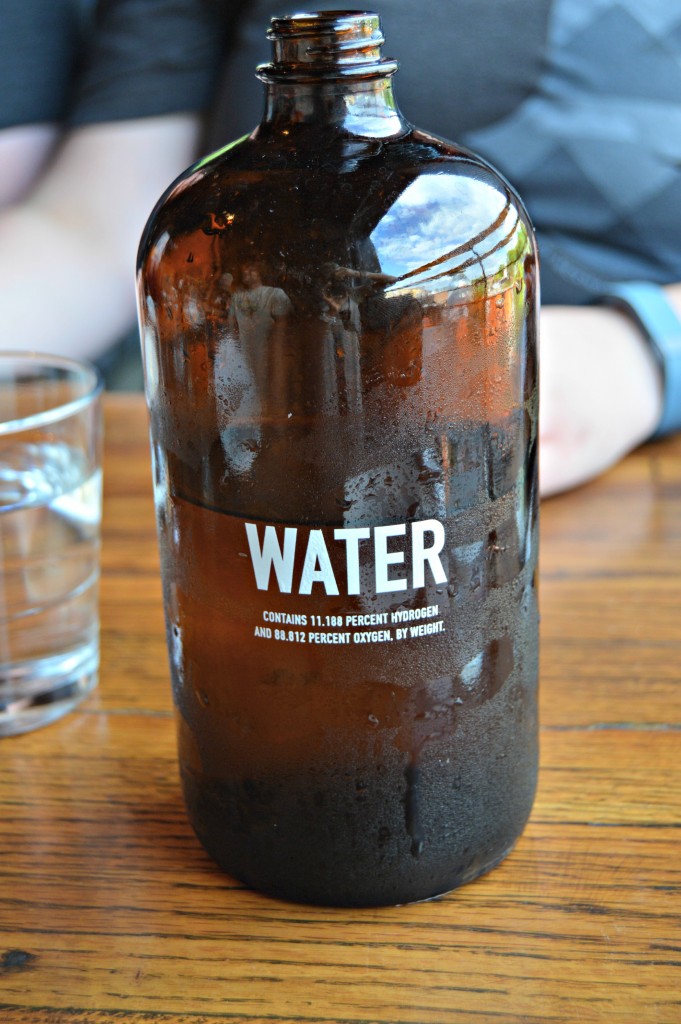 A few hours later, we headed up to the Highland neighborhood for an early dinner at Linger.  Linger is located in an old mortuary, and has the most fantastic atmosphere and cute touches.  Even the water containers lived up to the old mortuary feel. 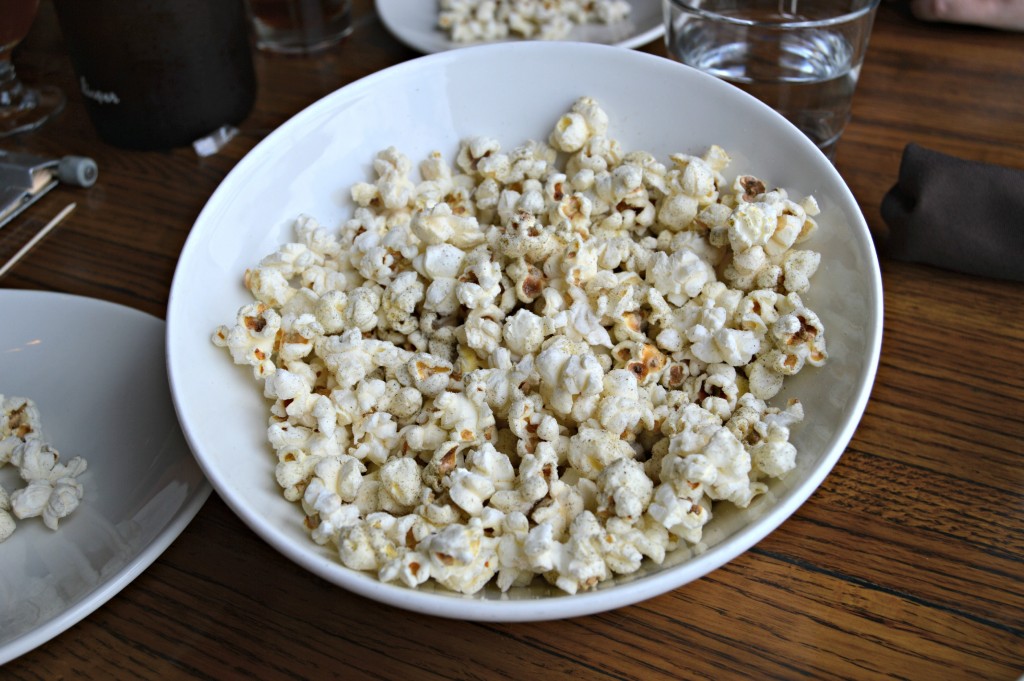 The waitress started us off with complimentary popcorn.  Obviously I could not say no to popcorn.  It was seasoned with cumin and garlic salt, which was an unexpected delicious combination. 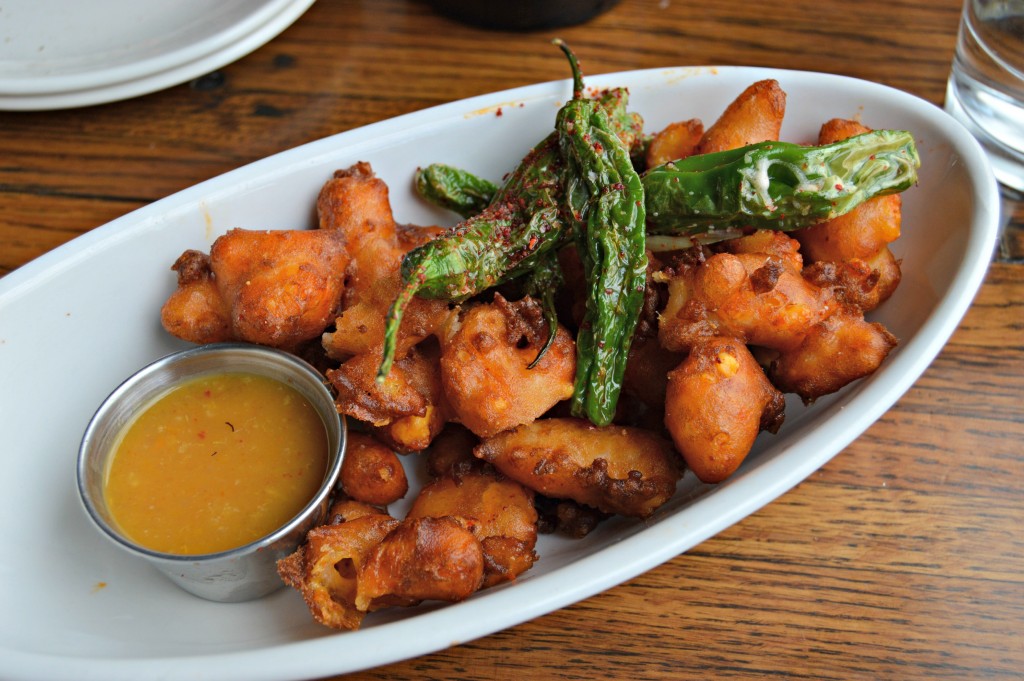 Linger’s menu was very well-marked, and the majority of the offerings could be made gluten-free by request.  The menu was set up in a way that encouraged us to order multiple dishes to be shared amongst the table.  Since I was keeping things GF, Jeremy and I decided that we would split a couple of dishes and each order a main for ourselves.

The first dish that Jeremy chose for us to share was the Crispy Cheese and Roasted Shishito Peppers, which were essentially cheese curds and roasted peppers served alongside a tasty orange-habanero jam.  I could not stop eating the cheese curds.  They were so good! 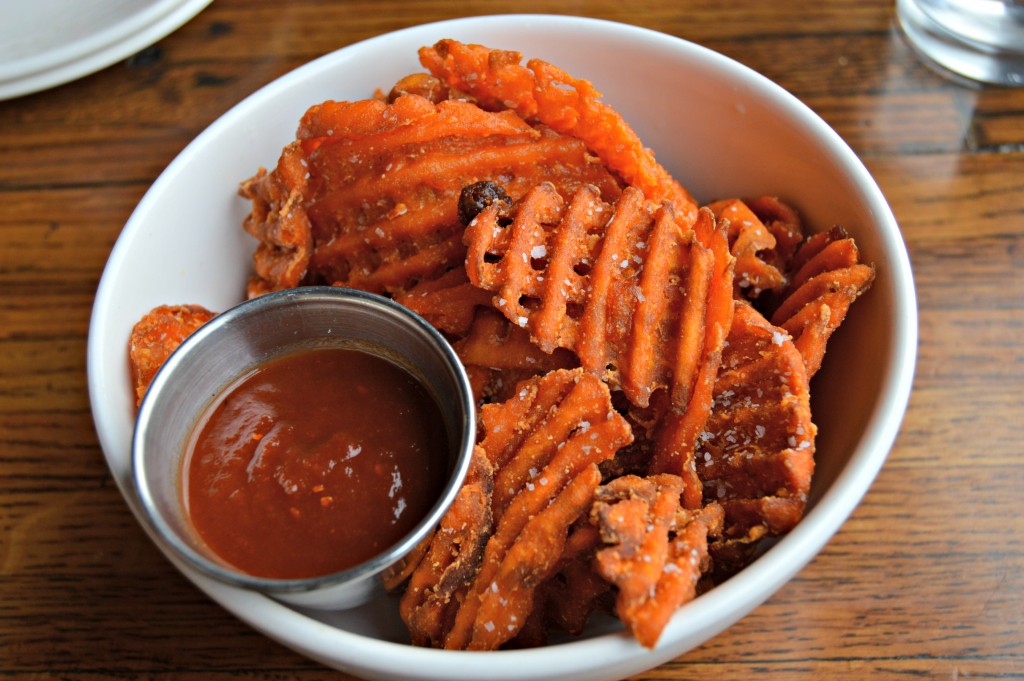 The small dish that I selected was the Sweet Potato Waffle Fries with a chipotle ketchup.  I am pretty much always a sweet potato fry lover, but these were easily some of the best that I have ever had.  They were perfectly crispy, perfectly salty, and the just-spicy-enough ketchup was a delicious accompaniment. 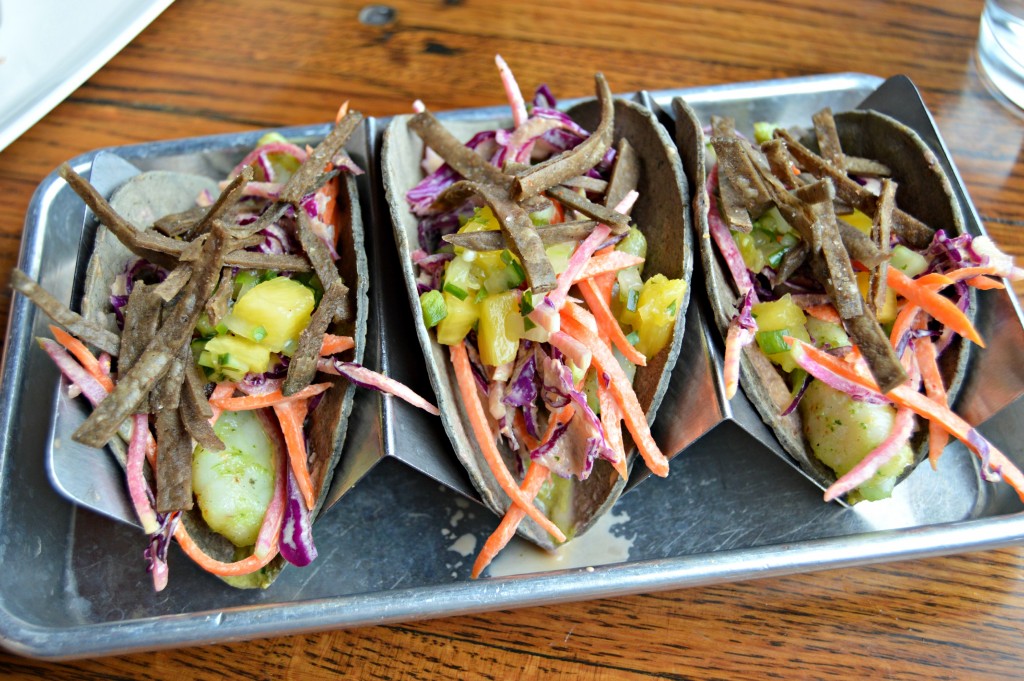 I selected the Seared Fish Tacos for my main.  They were made up of Alaskan cod, a cabbage slaw, roasted poblano crema, pineapple pico, and chili-lime tortilla strips.  Holy moly were those tortilla strips spicy!  I loved the kick that they added, but if you do not do “spicy,” you will want to ask for the tacos sans tortilla strips. 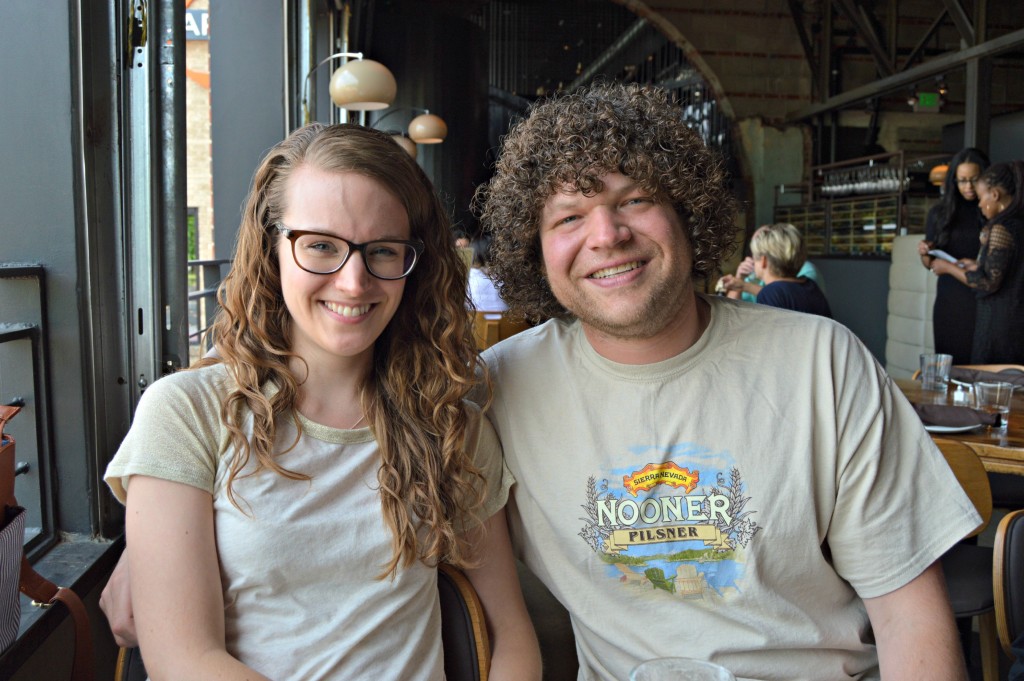 My cute date and I were matching… and we didn’t even plan it! 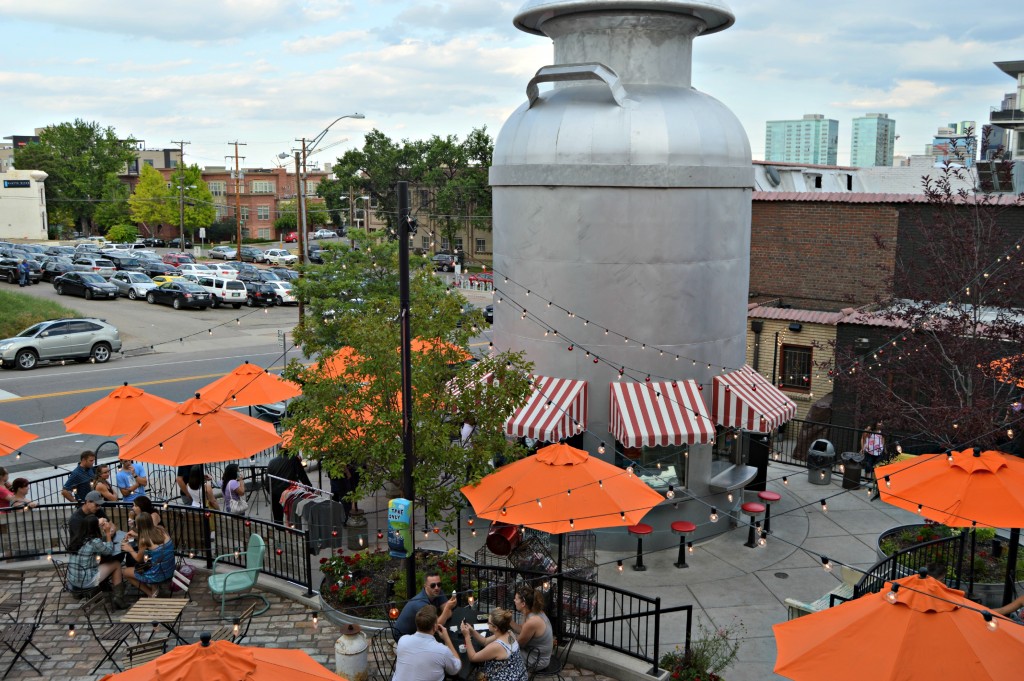 Our table at Linger was located right next to a giant open window.  The weather was perfect and we were loving the view.  As a result, we obviously could not miss or ignore the giant 28-foot tall cream can.  It turns out that it was the home of Little Man Ice Cream, an incredibly popular ice cream establishment in the Highland area.  I’m not kidding when I say popular.  We waited in line for about 30 minutes to get our sweet treats! 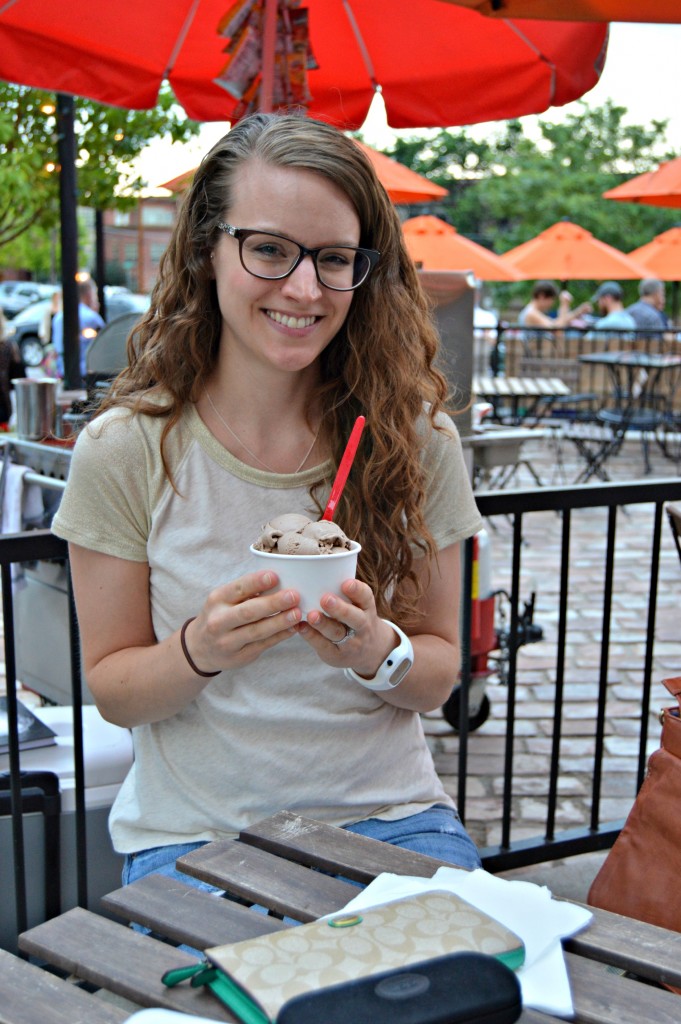 They had a few GF-friendly ice cream flavors, but I ultimately had to go with a big ‘ole scoop of the chocolate peanut butter.  It did not disappoint.  I would definitely wait in line another 30 minutes to be able to eat it all over again.

We spent the rest of our evening on the same front patio that we love so much back at Jeremy’s aunt and uncle’s house.  The six of us also may or may not have sipped our way through several bottles of wine.  No joke.  I think there were about five or six bottles on the countertop the next morning.  Luckily, I also drank plenty of water and felt pretty decent for the eight-hour drive home.  While I was so super sad to leave one of our favorite places, it was kind of nice to get back into a routine again.  Plus, we both know that we will absolutely be back in the future!

In case you missed my other posts, here are the first four vacation recaps:

Have you been to Colorado?  If not, you must add it to your travel bucket-list!