This is a continuation of our sweet baby boy’s birth story.  Start here if you missed Part 1. 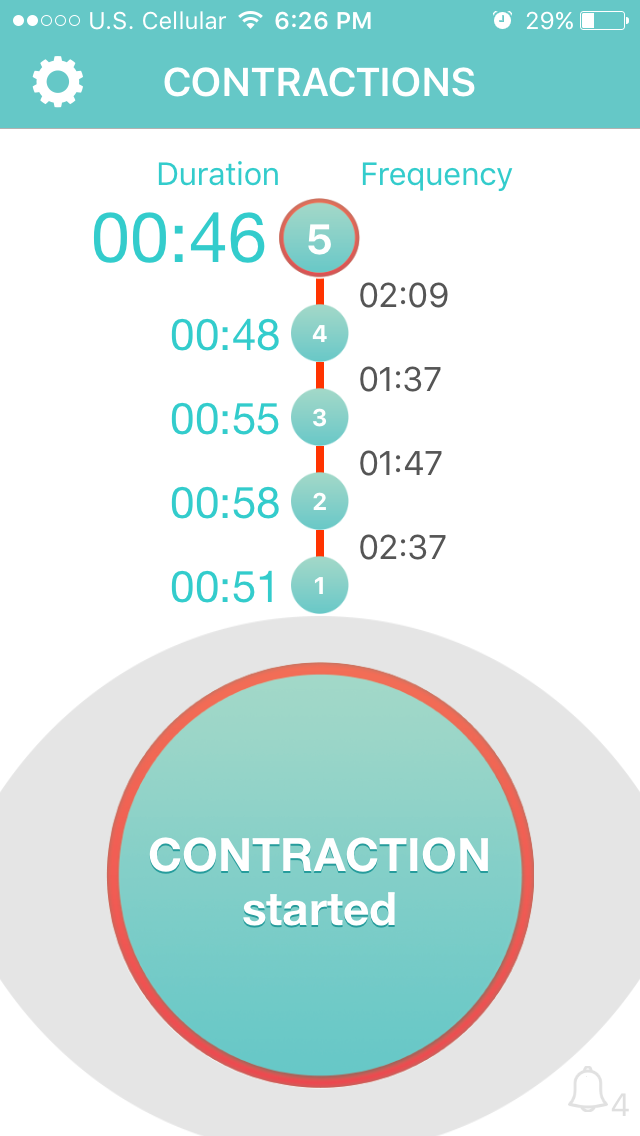 The period between 7:00 p.m. and midnight is when I truly began to experience what Pitocin-induced contractions are like.  They come fast, hard, and with little breaks in between.  At one point I was timing them as coming every minute, and I even experienced a period where I literally did not have a break at all in between.  I labored in bed for a bit, but this ultimately became too uncomfortable.  After using the restroom, I found that sitting on the toilet was a bit more bearable, so they hooked me up to the mobile monitors to try that.  Unfortunately, it only lasted about 15 or 20 minutes, and then I was over it.  I wanted to get into the tub, but my midwife was afraid it might stall my labor or that baby would not tolerate it well.  Listening to this recommendation is one of my only labor regrets.  If I could go back and do it over, I would have gotten in the tub anyways.  I should have listened to my gut!

My midwife checked me again around midnight.  After hours of extreme pain, I heard the last thing I wanted to hear: I was still only 3 cm dilated.  At this point, the conversation switched gears a bit to what my next steps would be.  My midwife mentioned breaking my water.  However, at this point, I was not sure I could handle the pain much longer.  Pitocin contractions are extremely intense, and that coupled with essentially no sleep for the past 26 hours caused me to talk with my midwife and doula about pain management options.  We talked about pain relief through my IV, but I was fearful of this option since I am easily nauseated.  I also brought up the option of an epidural.  After much discussion with Jeremy and my doula, I decided I needed to get the epidural.  I simply did not think I could labor for potentially hours and hours more without any rest or sleep.

I waited for about 45 minutes for the anesthesiologist to arrive, though it felt like much longer.  Never in my life have I been so happy for someone to poke me with a needle.  Compared to the contractions, the pain of the epidural was nothing.  And the fact that it brought me almost instantaneous relief made it worth it.  Unfortunately, that relief did not last long.  I felt great for several hours and even tried to sleep between 1:30 and 4:30 a.m.  Of course, sleeping when you must be sitting straight up in bed is difficult to do, but I managed to catch a bit of rest.  Sitting up proved to be a problem, though, because epidurals are most effective when you are laying on your side.  I started to be able to feel the contractions again and though they were mild at first, they started to become extremely uncomfortable around 5:00 a.m.

The midwife gave the okay to see if we could try to find a reclined position that baby boy would tolerate.  I ended up being able to lay on my right side from approximately 5:30 to 9:00 a.m.  It was glorious to be able to sleep for even just a few hours.  Sometime within this time frame, they also tried to break my water since I was progressing so slowly.  The midwife had difficulties in doing so, so she brought in an OB to assist.  She also was not able to break it, but said she could feel his head and that he had a little bit of hair.  They figured out that my water had apparently broken on its own at some point throughout the labor process.  It was never noticeable to me, so we are thinking it might have been leaking for a while.  Regardless, they noticed that there was meconium present, which meant the NICU team would need to be present for delivery as a precaution.  At this time, they also placed an internal fetal monitor to better monitor baby’s heart rate.

Around 7:30 a.m., I was visited by my third midwife of the induction and labor process.  She checked me and I was somewhere between 5 and 6 cm.  At approximately 9:00 a.m., baby stopped tolerating me lying down, so I was forced to sit upright in bed once again.  They also shut the Pitocin off at this point to give him a break, but this time his heart rate continued to stay high into the 160’s and 170’s without coming down into the “normal” range.  He clearly was not very happy!

I started to feel sick right around this time.  I had a stomach-ache and was quite nauseated.  I also could not stop shaking.  I had not eaten anything for more than 12 hours, but apparently the apple juice and ice water I was drinking (I remember feeling SO thirsty) were enough to make me throw up.  I vomited multiple times, which my doula and nurse both thought were great signs because they thought I might be in transition.  I was checked shortly after and was at 7 cm.

I continued to labor for a couple of hours.  When my vitals were checked again, they discovered that I was running a fever.  This is where I believe things turned from moving forward with a vaginal delivery to looking at the option of a c-section quite quickly.  Anytime they see a fever, they suspect a possible infection.  They started me on antibiotics in hopes to keep both baby and me safe.  At this point, it was almost noon.  I was checked again and had not progressed past 7 cm, I was running a fever, and our boy’s heart rate was still showing distress.  The Pitocin also remained shut off since they did not want to cause him even more distress.  Jeremy and I had a serious conversation with the midwife and our doula.  After a lot of discussion around the pro’s and con’s, we ultimately decided that a c-section was the way to go for baby’s health and safety.  I had extreme fears about him not tolerating the pushing phase if I could get there (and how I would have the energy to even push for hours), and that it could possibly result in an emergency c-section where I would be put under and Jeremy would not be present at all for the birth.  I ultimately figured that a c-section with both of us present and me awake would be the better route to take.

Sometime between noon and 1:00, everyone was prepping for the c-section.  We were visited by multiple doctors to explain the process.  It was also during this time that I was extremely uncomfortable since my epidural was not working properly.  I was feeling everything on my left side, especially in my back.  I wanted them to hurry up and get rolling with the c-section so that I would not have to feel any more of the pain. 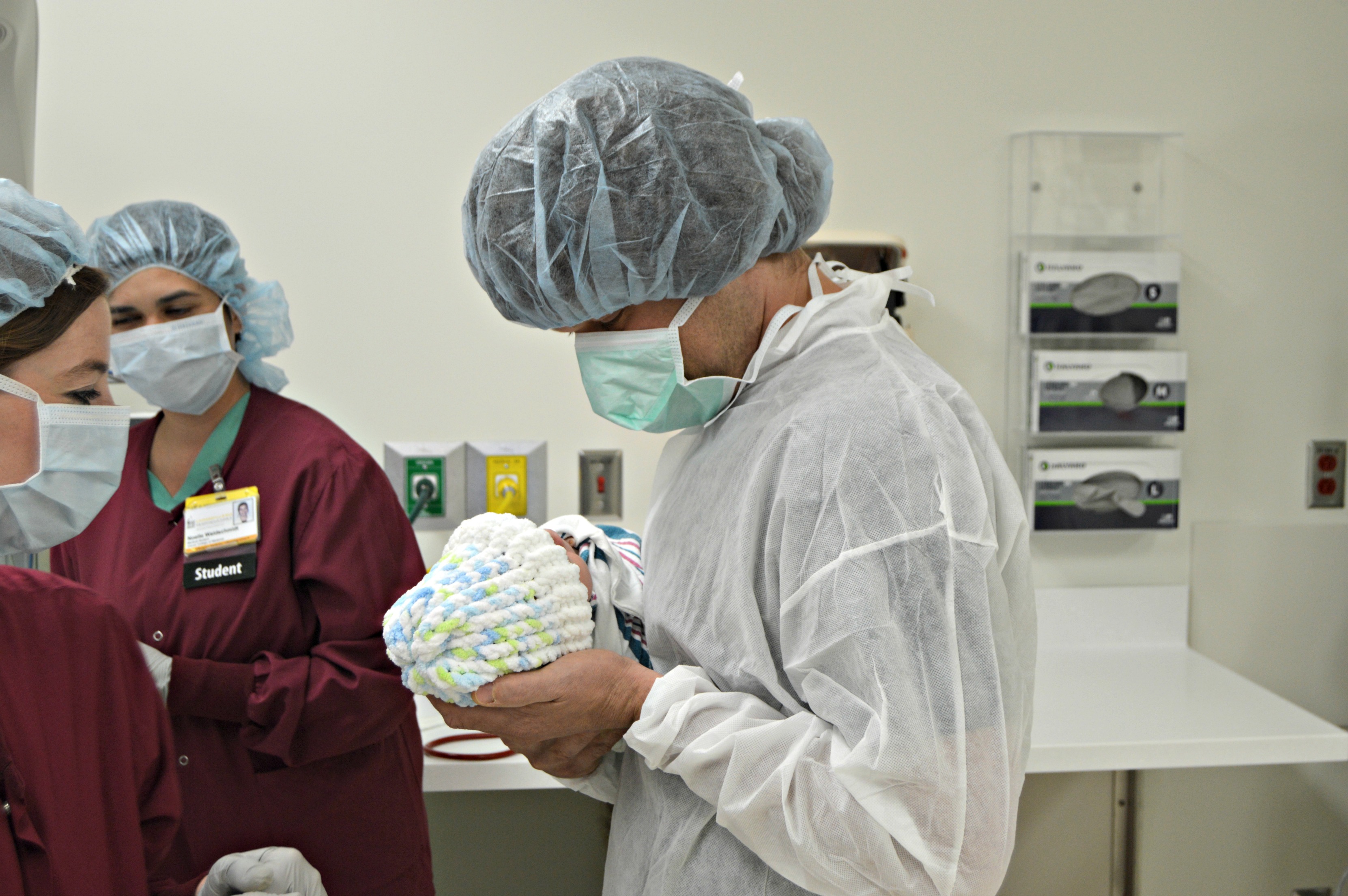 Finally, around 1:15 p.m. I was wheeled back to the operating room.  Once I was there, everything moved quickly.  I finally got pain relief for my contractions since everything was numbed up.  I felt like there were a million people in the operating room with the surgery team, NICU team, anesthesiologist, my midwife, and the nurses.  Jeremy was able to join right before they began the procedure.  I, luckily, did not feel much other than some strong pressure.  With that, our sweet baby arrived on Friday, July 28th (42 + 1 weeks) at 1:46 p.m. and we heard them say, “boy.”  I was not able to see him right away as he was taken over to the warmer bed.  Jeremy joined him there, and I could watch on a video screen as they cleaned him up, he cried his first cries, and Jeremy cut the cord.  It was a crazy surreal and emotional moment. 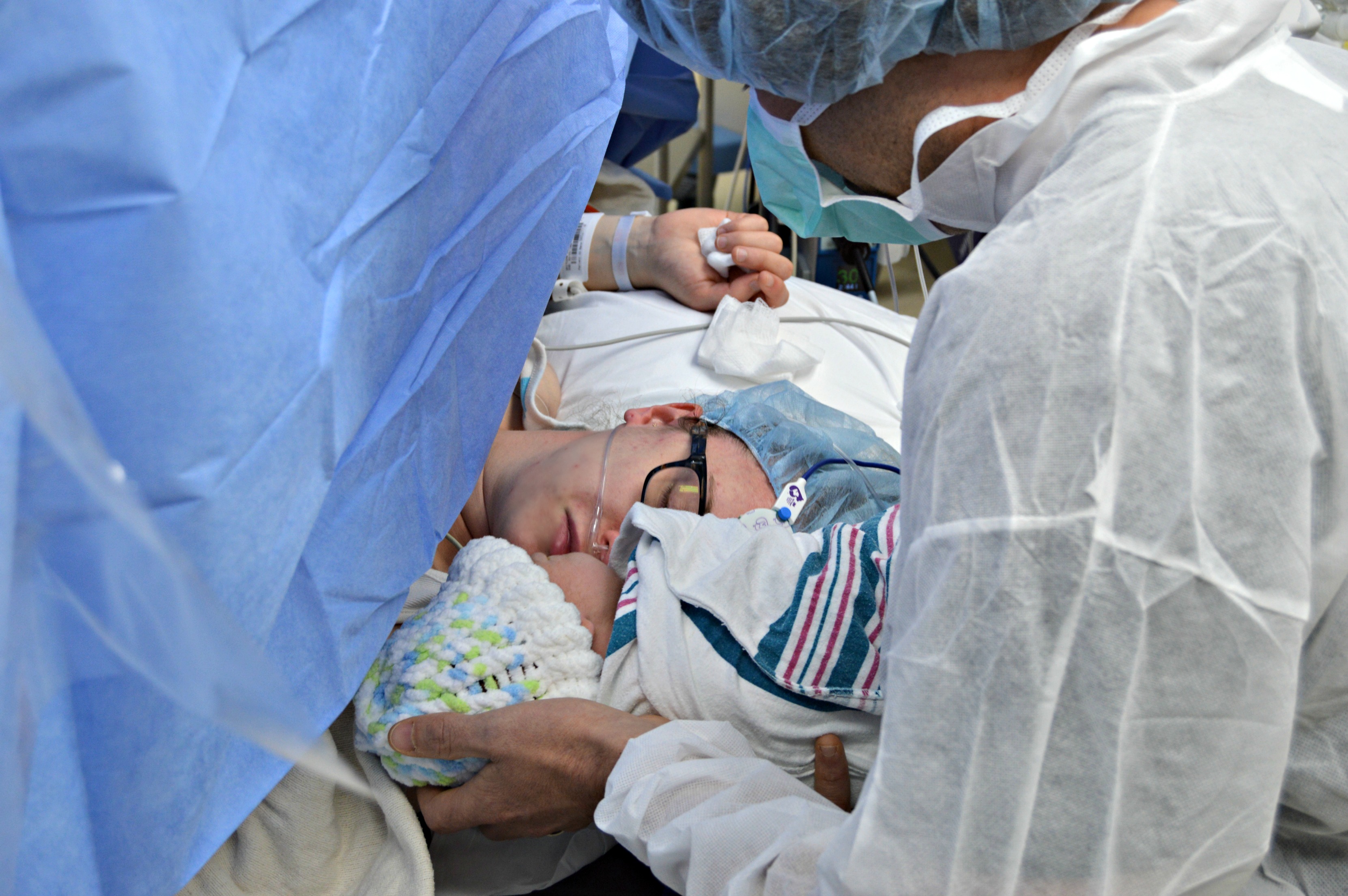 After he was all cleaned and wrapped in a blanket, Jeremy brought him over to see me.  He was just the sweetest thing ever in the world to me at that moment.  I was also able to hold him for about a minute, which was more than I initially expected to be able to do.  Then as quickly as I saw him, he was taken back to the warmer.  I instructed Jeremy to stay with him at all times, so he left as I was stitched back up.  I was absolutely exhausted at this point from a combination of the medication and lack of sleep.  I drifted in and out of sleep, but near the end remember thinking, “come on, hurry up.”  In looking at the clock in the operating room, it took about an hour and a half before I was ready to go to the triage room for recovery.  Our doula was there waiting for me, and we chatted and watched game shows on TV as I dozed in and out of sleep.

Then the moment finally arrived when I was going to go see my sweet boy!  I arrived to the mother and baby unit and Jeremy and “Baby Bee” joined us shortly after.  I got to snuggle him for the first time for longer than one minute and it was bliss.  I was also obsessed with seeing Jeremy interact with him.  I know he was a nervous first-time dad, but he honestly looked like a natural.  I guess that’s how it goes when it is your own. 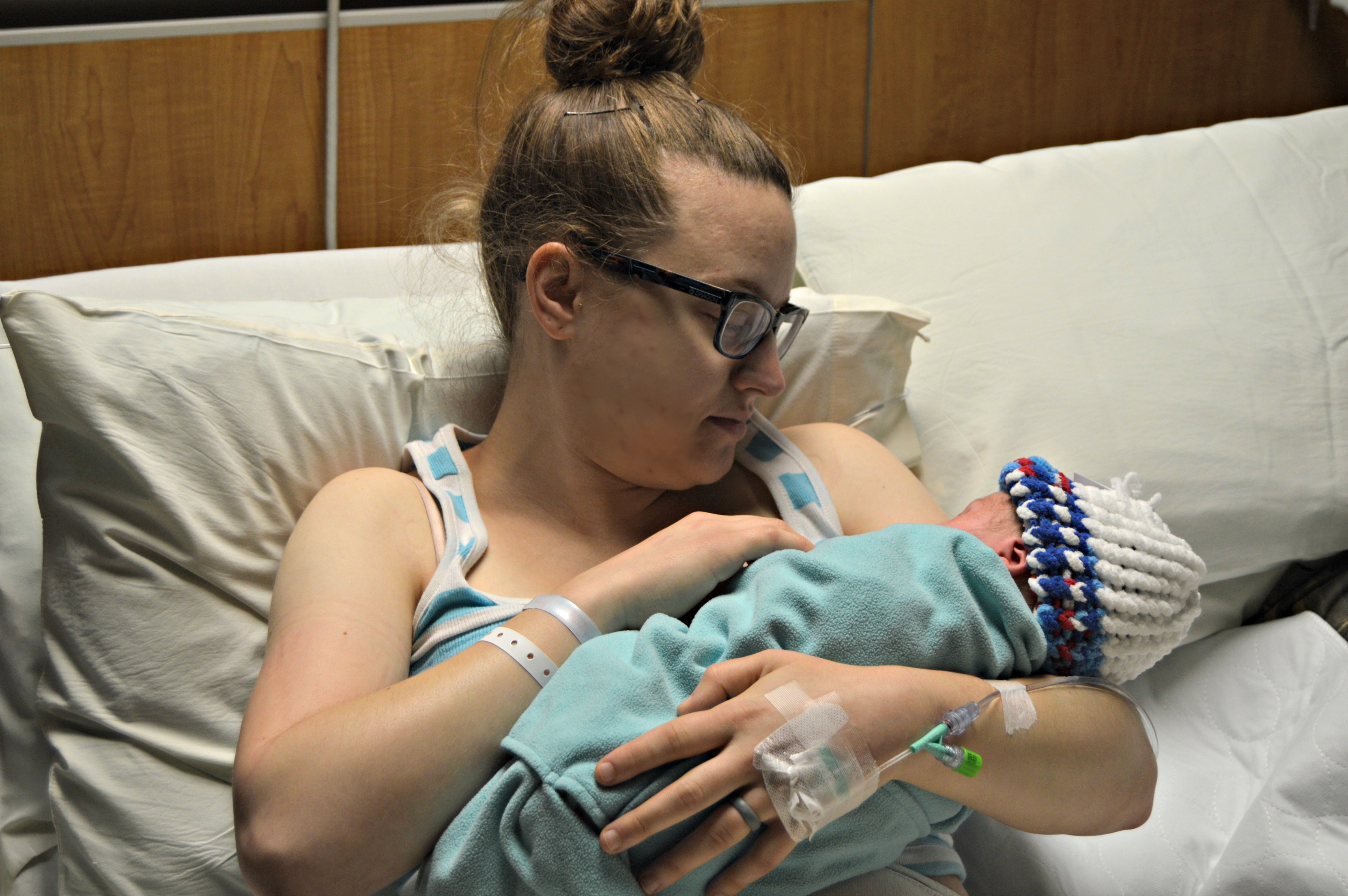 Was this my “ideal” birth experience?  No.  But did I get a sweet, healthy, and happy baby boy out of it?  Yes.  And that is what matters!

Over the past week and a half, we have been enjoying loving on sweet “Bee.”  We are figuring out how to live on a crazy sleep schedule, though still feel lucky that we have been getting at least five to six hours in each night.  We are also learning how to breastfeed, which is honestly one of the most physically and mentally challenging things I have ever done.  When people say it is hard, they are not kidding.  But through the challenges, we have had plenty of amazing experiences, like seeing his funny facial expressions, watching him open his eyes more, giving him his first bath at home, and enjoying plenty of snuggles.  We are blessed with the best baby boy!