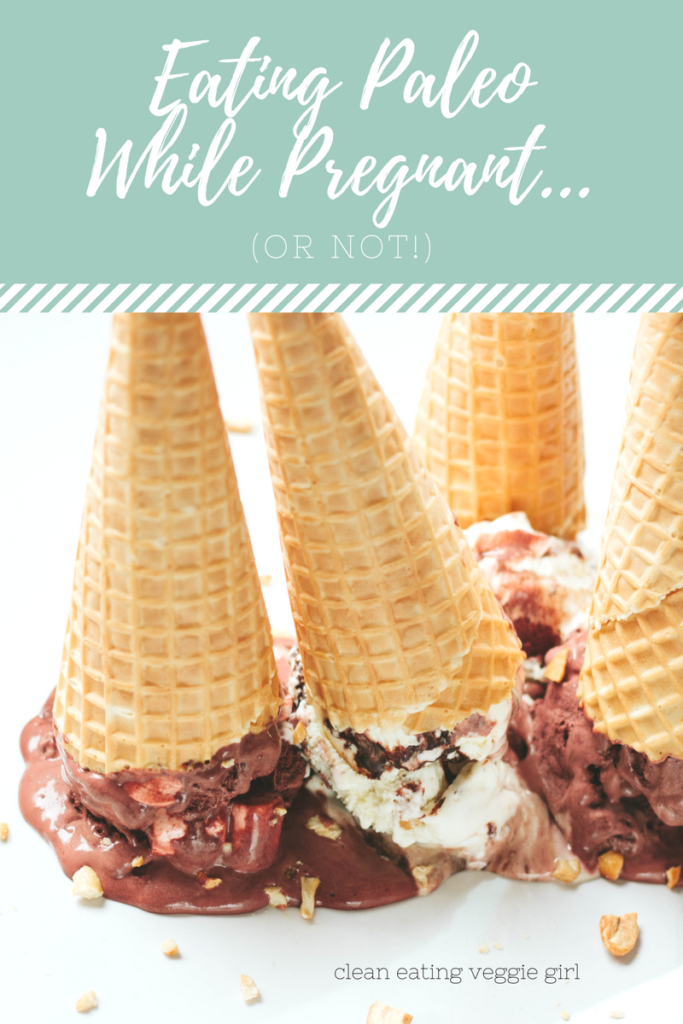 Before I got pregnant in October, some might say I was following one of the healthiest possible diets for my body (emphasis on my body).  I chose foods based on the Paleo diet and also eliminated additional foods that caused me physical or mental symptoms or that I had identified through food sensitivity testing.  While I was by no means symptom free, I was feeling pretty darn good last Fall.  And then… boom!  Morning sickness hit.

I think if you had asked me what I envisioned for the perfect pregnancy diet about a year ago, I would have said absolutely no gluten, grains, dairy, or legumes.  I also would have said no to processed foods, artificial flavors/dyes, and non-organic foods.  And while I definitely still think that sounds like a pretty awesome diet to follow during pregnancy, I also know it is simply not realistic for so many of us.  Especially those of us with morning sickness.

I definitely got a preview of what things would be like when I had mono back in May and June.  My then Paleo diet changed almost instantly thanks to the constant nausea I experienced with my bout of mononucleosis.  Things went from eating for health to eating to maintain enough calories for my body to live and recover.  What those calories looked like did not mean much to me outside of what looked “edible” and was not nausea-inducing.  Looking back, I sort of think this was the universe’s way of preparing me for morning sickness and helping teach me that the Paleo diet was not something I would always be able to realistically follow.  It also helped me accept the fact that this was 100% okay.

Sure enough, when I began experiencing morning sickness in November, the very thought of eating nearly anything involving meat or vegetables was completely off-putting.  So I relaxed my high standards for myself by adding grains back in.  Carbs were essentially one of the only foods that actually sounded like something I could keep down, so it was pretty easy for me to begin incorporating them back in.  At that point, I also accepted the fact that future diet changes were likely inevitable.  Even still, I had a goal to at least try to keep things completely gluten and dairy-free.

That lasted a whopping four days into my morning sickness.  Some grains were helping me make it through the day, but I just could not shake the fact that cheese also sounded good enough to be edible.  I think I may have beat myself up for all of 30 seconds regarding my choice to include dairy in my diet again.  I didn’t love the decision, but I was actually able to eat something other than gluten-free cereal and rice cakes, so I chose to look at it as a win.

Throughout the many weeks of morning sickness that followed, I added additional foods back in including legumes, processed foods, and a lot more sugar.  Essentially the only thing that I 100% committed to avoiding was gluten, simply because I know it is not something my body is ever happy with.

Now at almost 25 weeks pregnant, my morning sickness is gone and nearly all of my food aversions have subsided.  I am also to the point in my pregnancy where I am very aware and conscious of the health of my baby.  As a result, I have been trying to find more of a balance with healthy eating.  That looks something like completely gluten-free with some dairy, legumes, grains, nuts, seeds, and nightshades.  It also looks like ice cream, dark chocolate, a lot more fruit than I’m used to, and a lot more eating out.  Sometimes my meals are Paleo.  Sometimes they aren’t.  But making the choice to select quality meats and organic produce as much as possible, while splurging on some meals or snacks out is working for me right now.  I truly feel as though I am in a season of balance with my eating (which I think you can more clearly see on my Instagram account).

Hannah a couple of years ago probably would not have been okay with this philosophy.  I likely would have had the attitude of, “you should be eating the healthiest diet possible right now.”  However, Hannah today doesn’t have that philosophy at all.  And gosh, is that comforting!

Now that I have experienced pregnancy firsthand (especially the accompanying morning sickness and food aversions), my philosophy on eating while pregnant is simply to do the best you can.  That may look like a completely Paleo day one day, while the next day may involve two meals eaten out and stopping for ice cream for dessert.  If Paleo food sounds good to you, eat it.  But if you want or need a slice of cheese on your burger, go for it.  And don’t you dare be hard on yourself for choosing to eat a gluten-free chocolate cupcake when a co-worker makes them (this seriously happened and it made my day!).

Moving forward throughout the remainder of my pregnancy, I plan to follow this season of balance.  I also plan to listen to my body and if certain foods make me feel crappy (AKA red sauces right now), I will politely decline.  I’m not completely certain how the remainder of my pregnancy will look in relation to my diet, but that is something I will take day by day.  Ideally I would love to be very close to back to Paleo by the time I deliver for a couple of reasons: I tend to feel my best when eating that way, and I know that the hormonal fluctuations that accompany the birth of a baby can really mess with thyroid and autoimmune conditions.  I hope to try to combat these things with diet as much as possible, and I think a gradual transition back to Paleo will be helpful in avoiding future freak out moments.  But I guess only time will tell!

Moral of the story: if you currently follow a Paleo diet or have in the past and feel that you should  be eating Paleo while pregnant, don’t be so hard on yourself.  Don’t force this standard on yourself.  Listen to your body.  Do the best you can.  And enjoy as much as you can about your pregnancy… including the sweets!

Don’t feel bad or guilty for a second if you are not eating Paleo while pregnant.