I’m actually sitting at one of my local Starbucks because we have yet to have our cable and internet set up at our new house.  Even though we moved in more than a week ago, this afternoon was the earliest available appointment.  Thank goodness today is finally the day.  Hooray!

Being without cable and internet hasn’t been nearly as tragic as I thought it might be.  It has actually given me more of an excuse to work on house projects and watch old One Tree Hill and Laguna Beach episodes that I have on DVD.  Oh to be in high school again.  Not.  Totally wouldn’t go back if I had the chance.

Today’s post stems from the fact that I straight up love day in the life posts.  Though this is a predominantly food/recipe-based blog (and I’d like to keep it that way), I thought it might be fun to throw these in every now and then.  After all, you should totally write the kind of blog you want to read.  That’s just common sense, eh?  So about my Saturday… 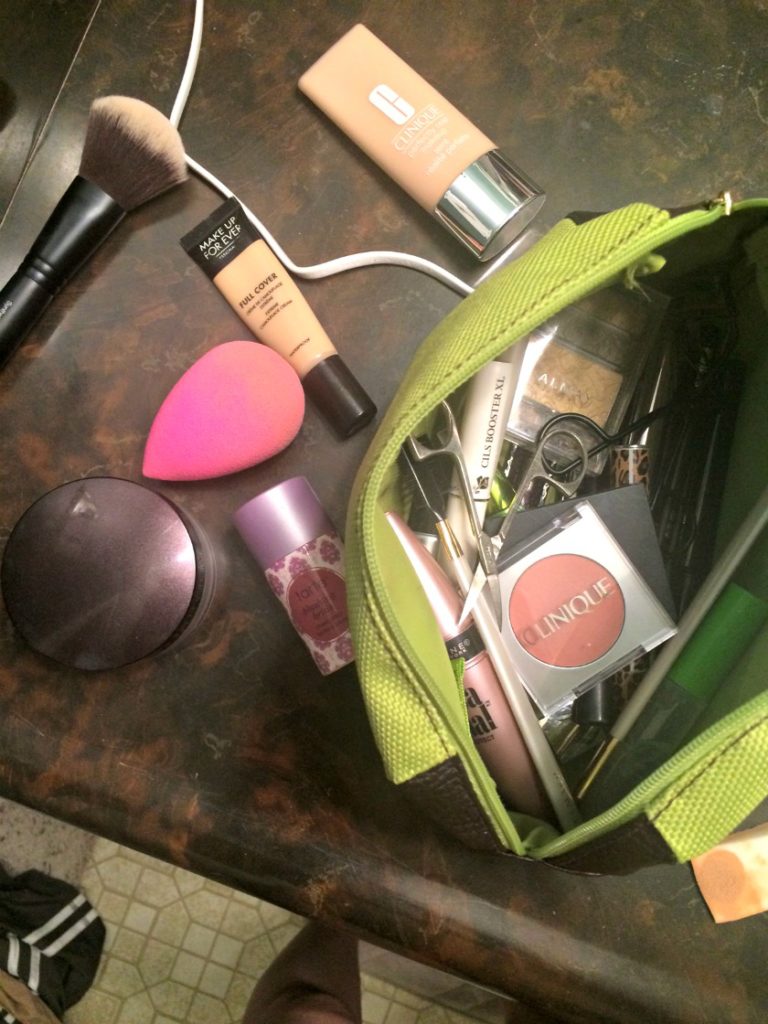 I woke up around 7:15 (this was “sleeping in” for me), showered, picked out a comfy outfit, and put on makeup.  It is rare that I wear more than concealer and blush, so I guess it was a bit of a special day. 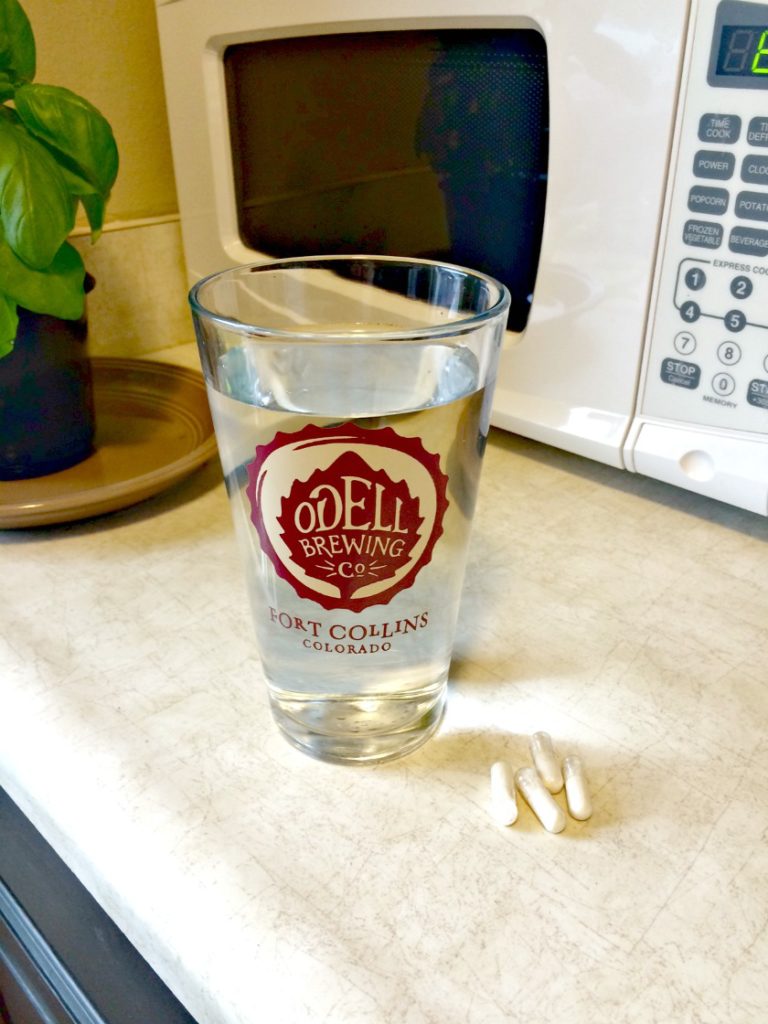 Once I was ready for the day, I chugged this 16 ounce glass of water while popping probiotics.  I am on a super strong dose right now,  which happens to only be available in powder form.  I have to encapsulate about eight of these babies every day, but it is so much better than drinking it.  It smells/tastes seriously awful. 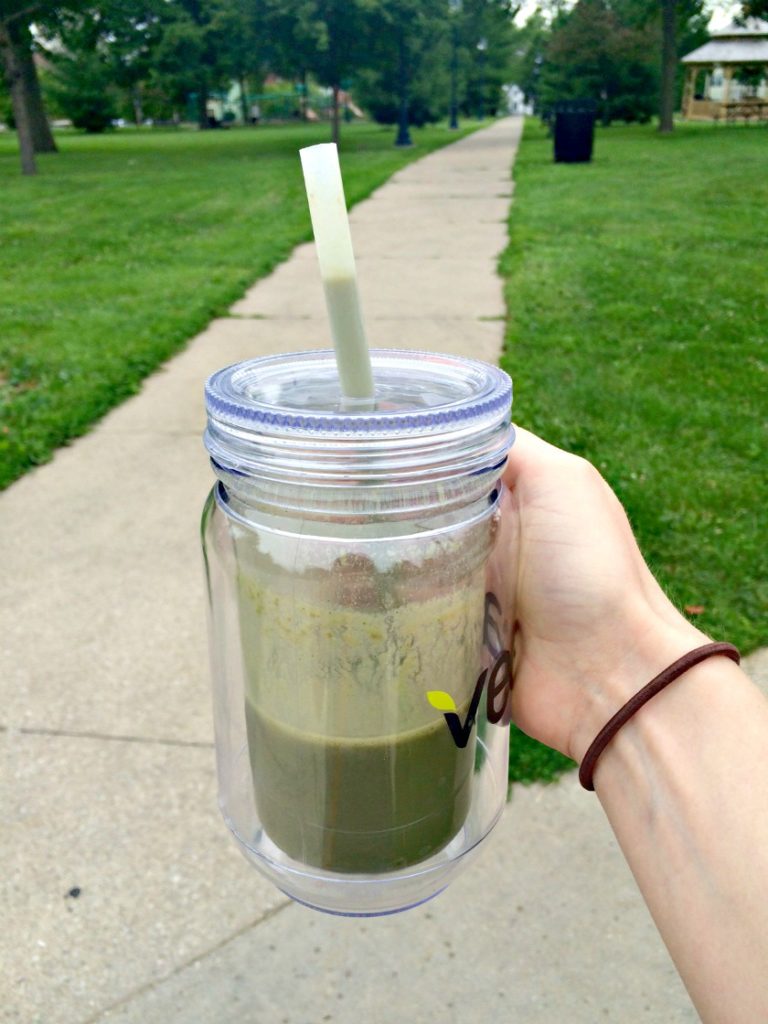 Jeremy and I ran out of the door with breakfast #1 in hand.  A green smoothie with almond milk, chocolate protein/detox powder (another functional medicine recommendation), frozen zucchini, frozen raspberries, and frozen spinach. 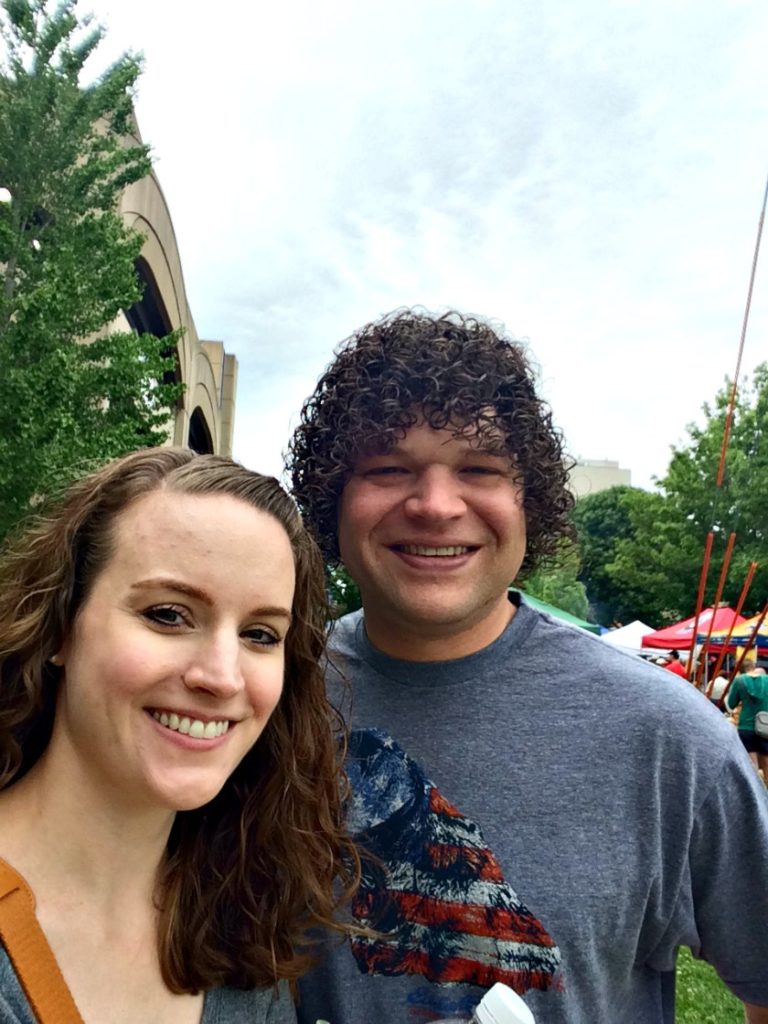 We had a date with the farmer’s market… 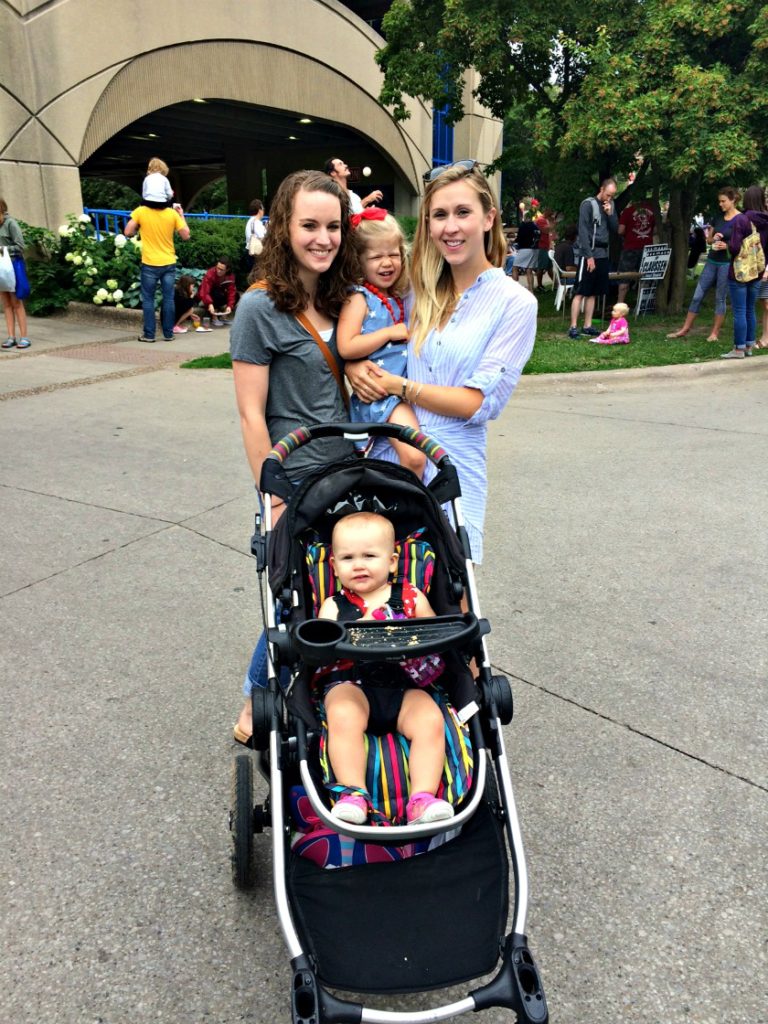 …and these girls.  It was so great getting to see Joanna, her husband Jeff, and their sweet girls in my neck of the woods.

We sampled, shopped, and popped into a local coffee shop to chit-chat for a while afterwards. 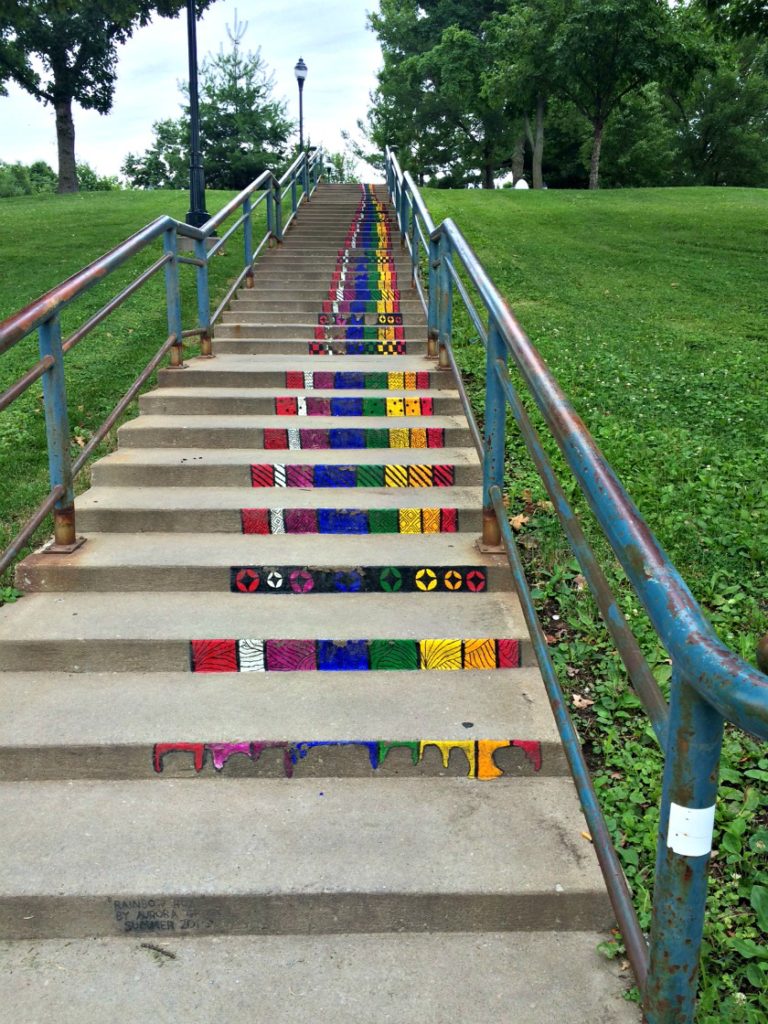 On the way back to the car, Jeremy and I fell in love with these stairs. 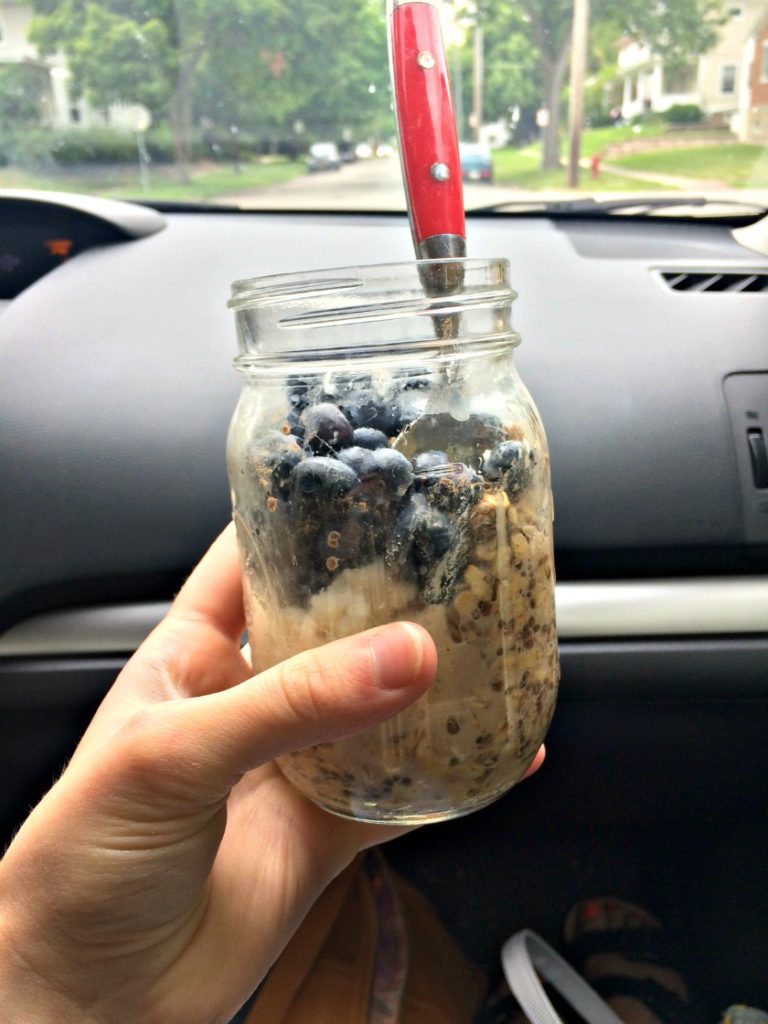 It was nearly 11 by the time I inhaled breakfast #2: soaked oats topped with blueberries and coconut butter.  P.S. Don’t put coconut butter in a lunch box next to an ice pack.  It gets rock hard and is nearly impossible to eat. 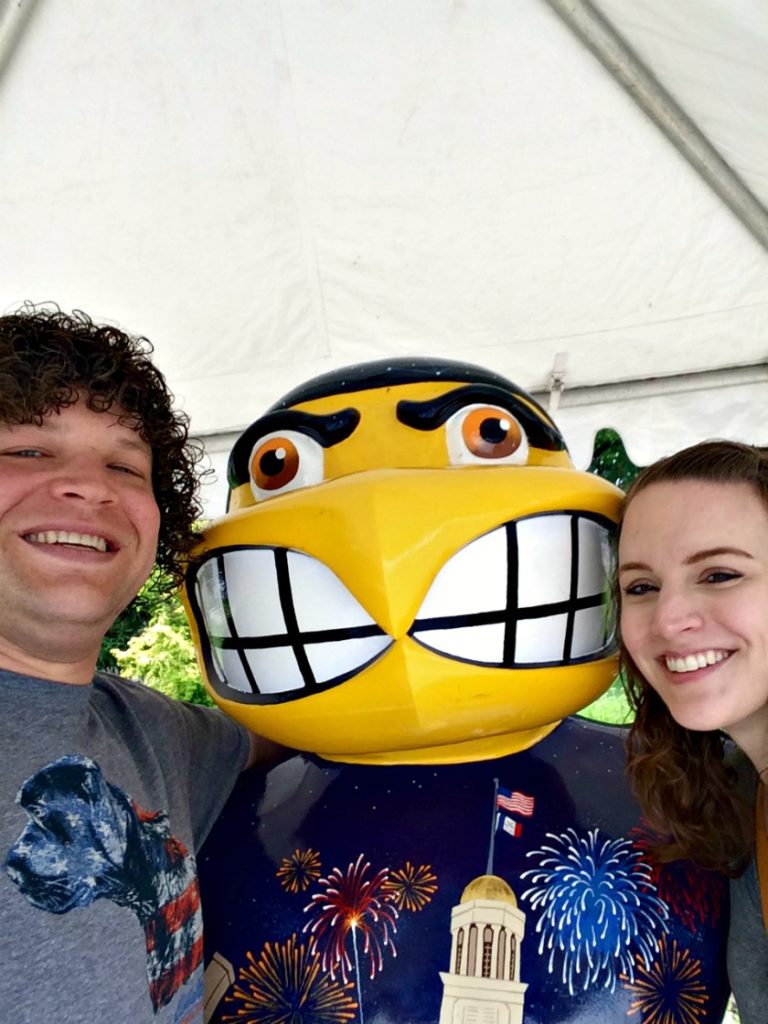 Our next stop was Jazz Fest, which was happening in downtown Iowa City.  The downtown area is right next to the University of Iowa, so we obviously had to take a selfie with Herky. 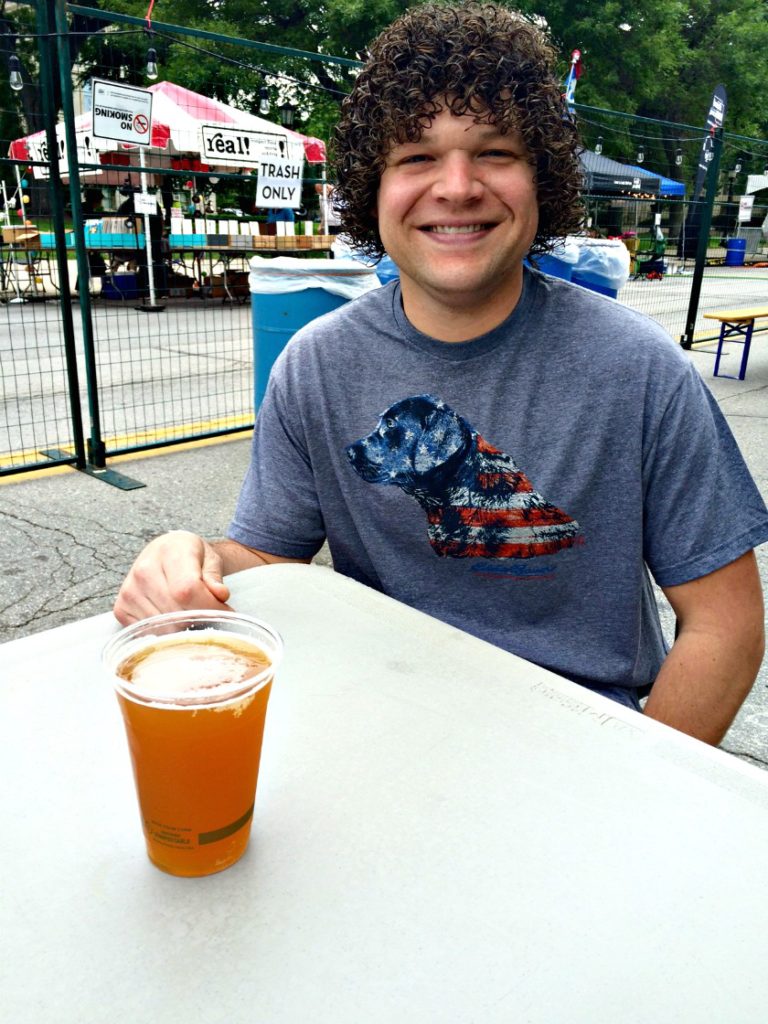 And Jeremy had to get his obligatory Saturday morning beer. 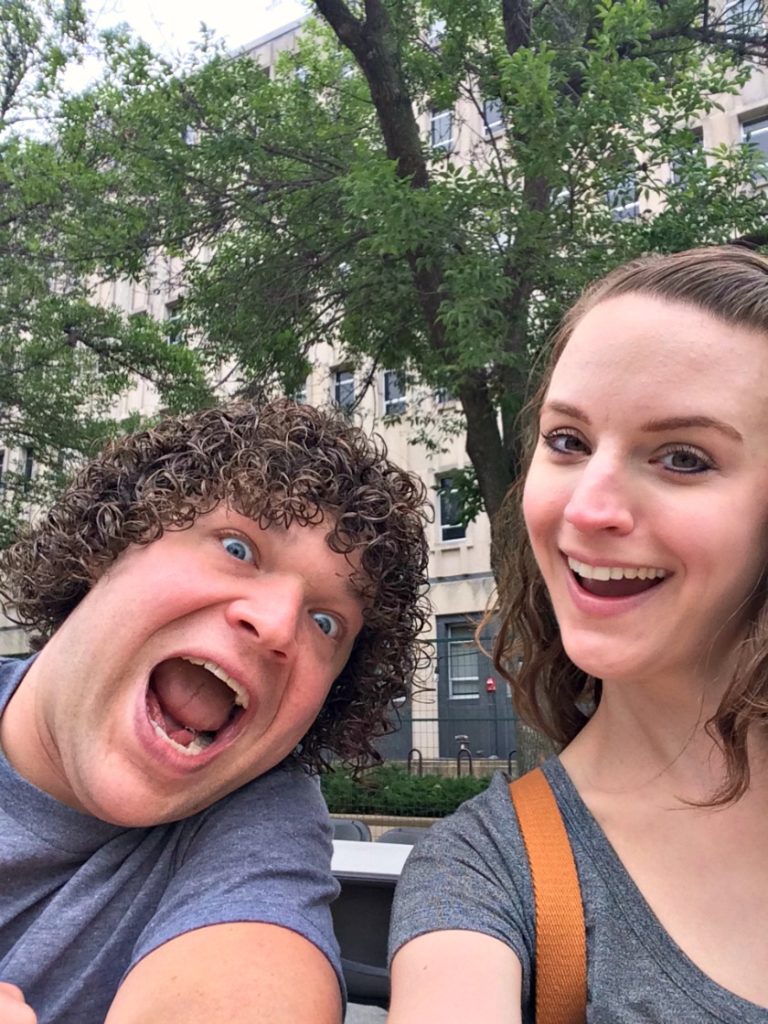 And then we took selfies to try to distract ourselves from the fact that it was unseasonably chilly for July. 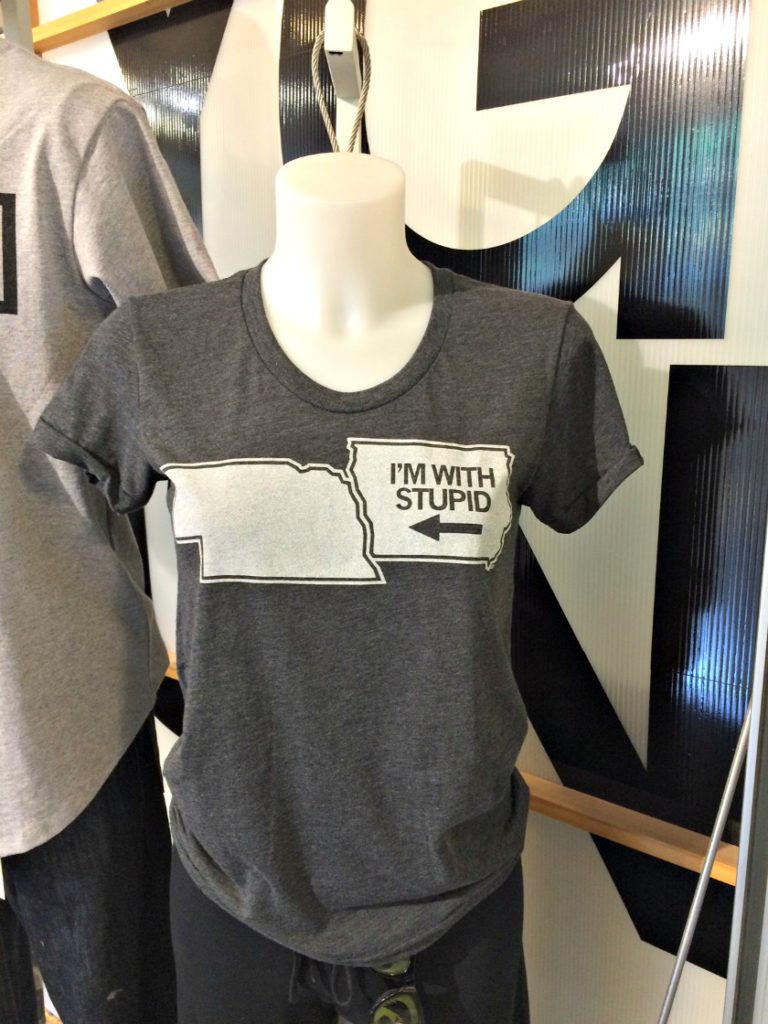 When the beer was gone, we walked to Raygun.  My former self probably would have found this shirt funny, but my three-year Nebraskan self found it a bit offensive.  My how things change! 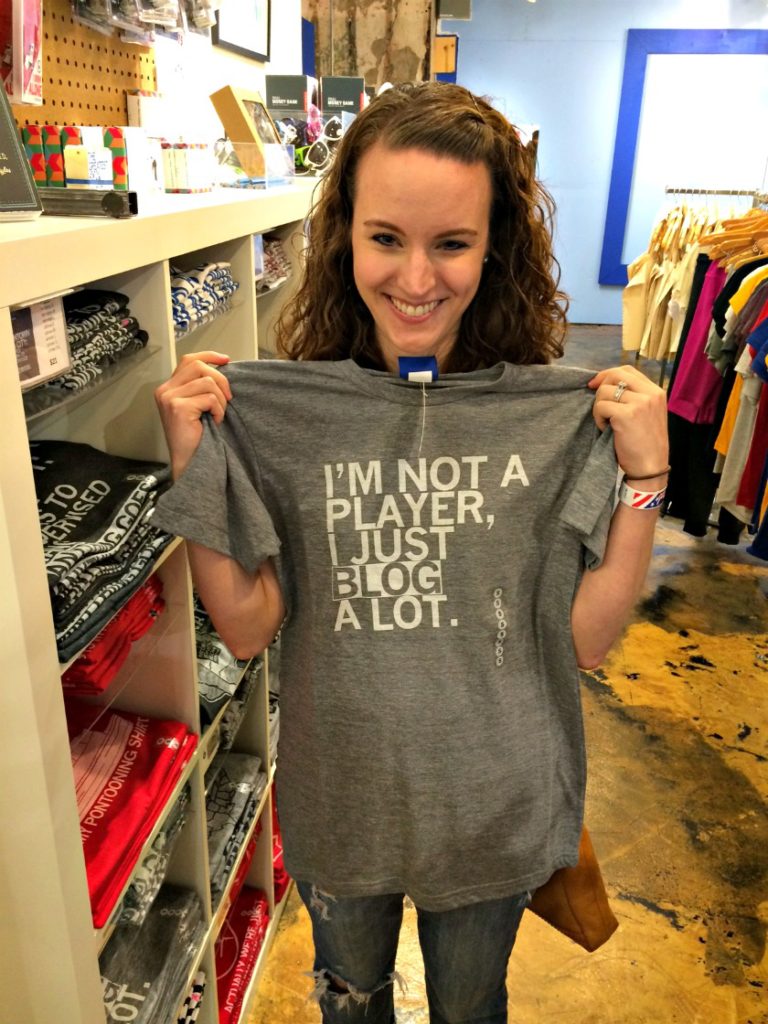 I did, however, find a shirt that I’m pretty sure I need. 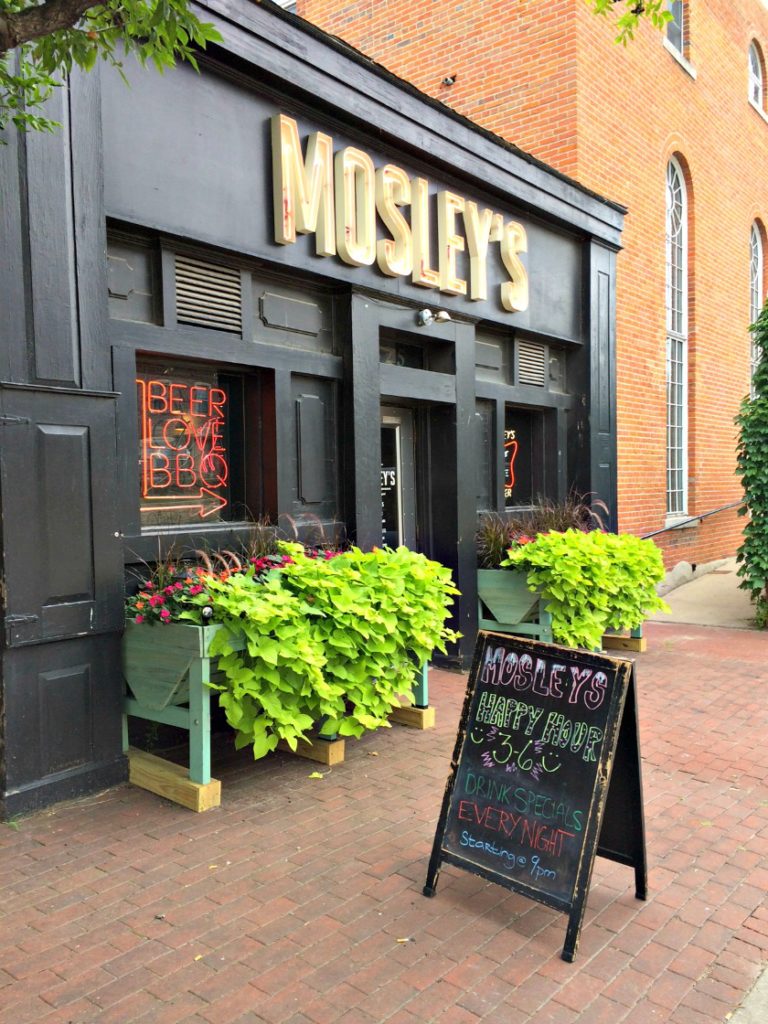 It was around 1:30 by the time we finished perusing through shops.  I had one thing on my mind: Mosley’s. 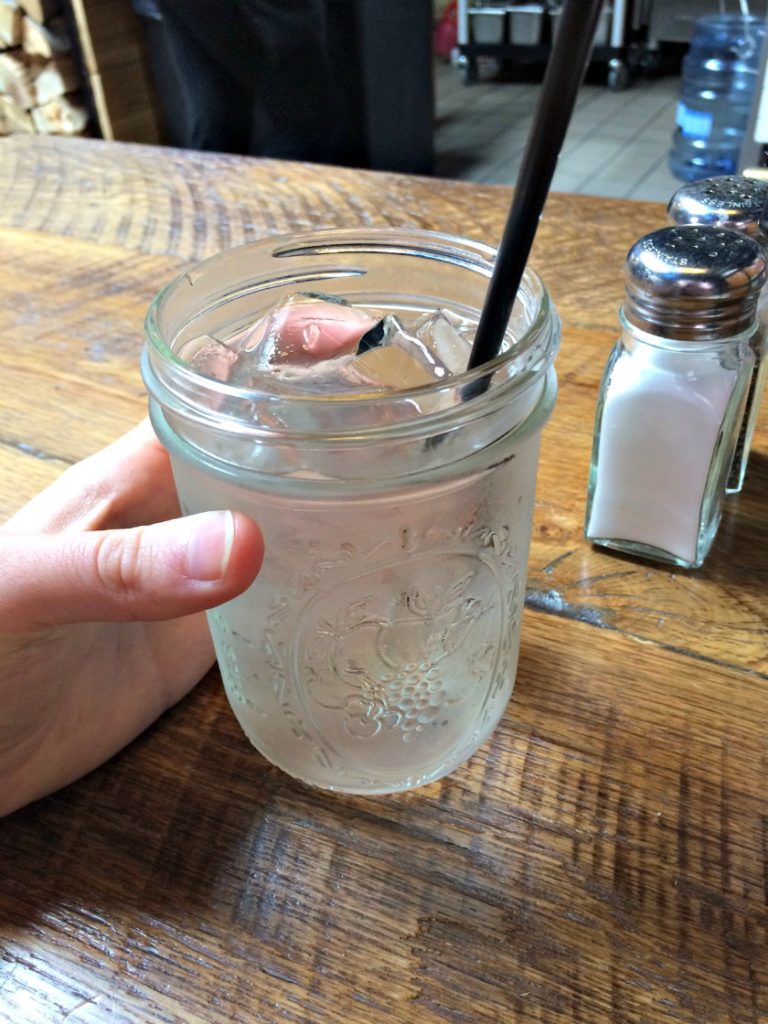 I love anywhere that serves drinks out of mason jars. 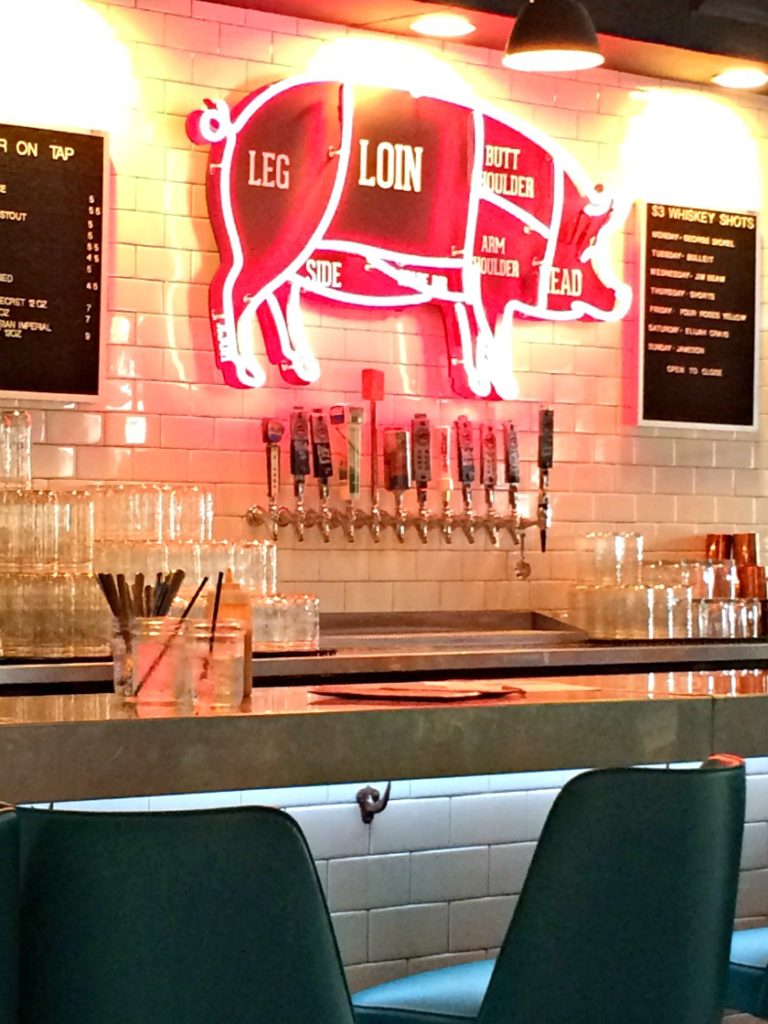 And that has a hot pink pig on the wall. 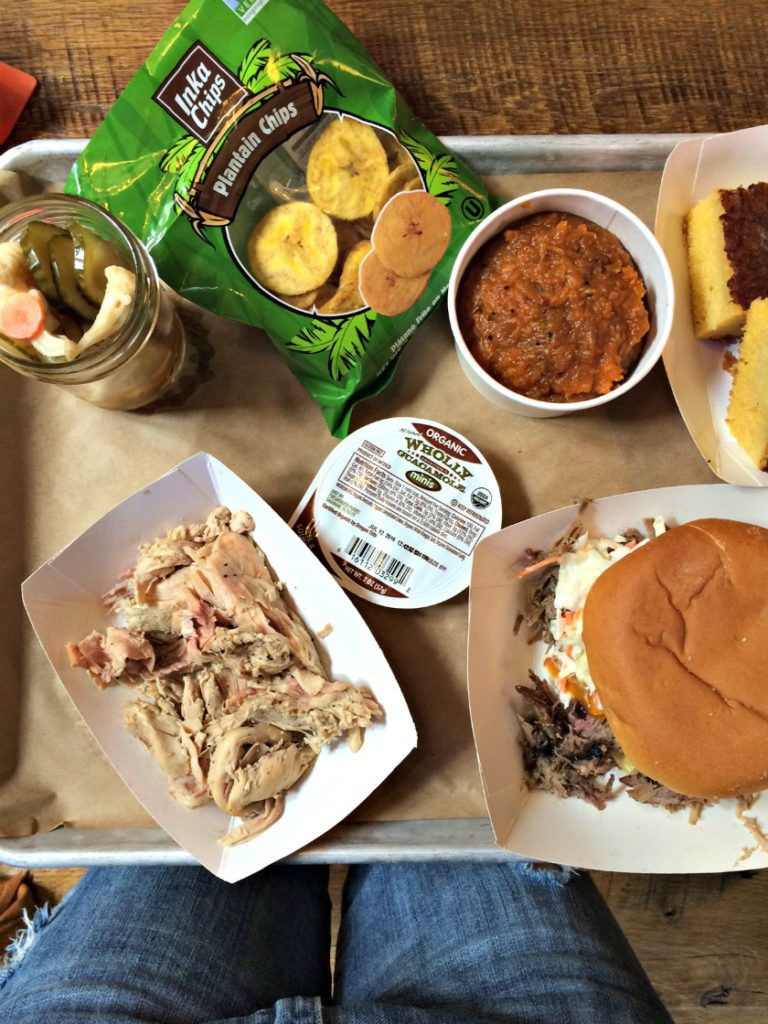 My current elimination diet can make eating out challenging, but barbecue joints are usually the easiest to navigate.  I chose the smoked chicken and a jar of pickled vegetables.  I also brought along my own guacamole and plantain chips to round things out.  Not gonna lie, I was majorly eyeing Jeremy’s mashed sweet potatoes the entire time. 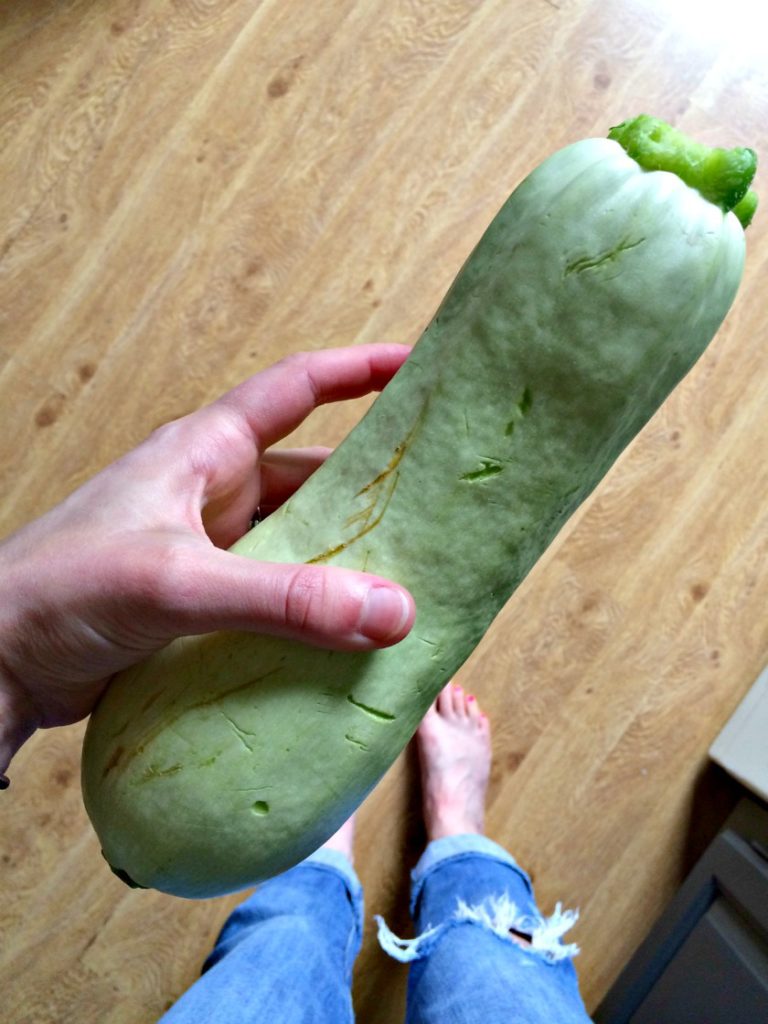 We headed home after lunch.  I just have to show you my favorite farmer’s market find.  It was a ginormous zucchini that looks a bit different than your usual zucchini.  The farmer told me it would be sweeter, but honestly, I couldn’t tell much of a difference.  Either way, a giant organic zucchini for $1 is my kind of zucchini. 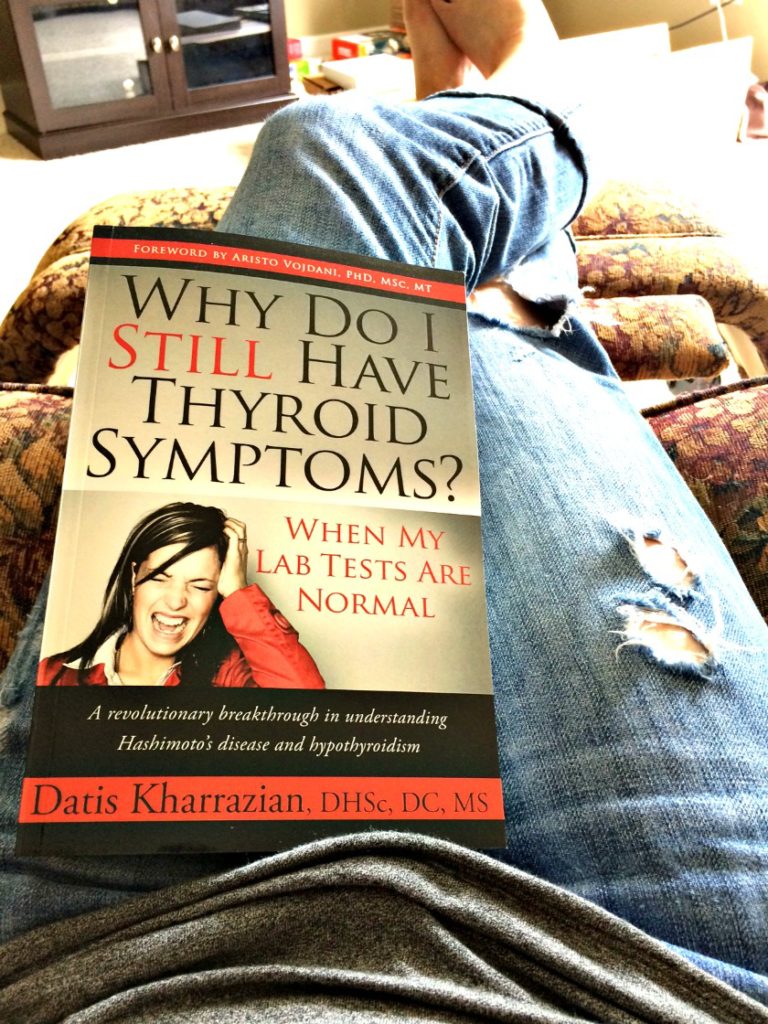 Jeremy and I lounged around the house for about an hour in the afternoon.  I started reading this book and attempted not to fall asleep since I knew it would mean I would sleep horribly that night.  I also pretended like the boxes/mess in the background didn’t exist. 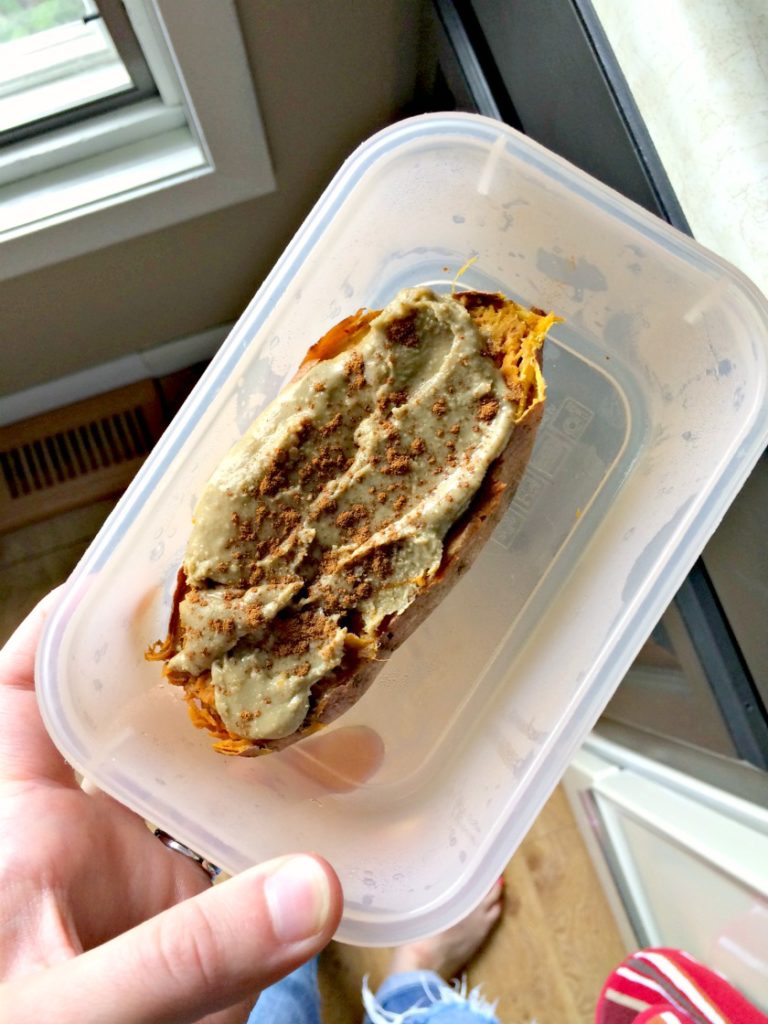 Hunger struck again so I snacked on half of a leftover baked sweet potato topped with sunflower seed butter and cinnamon. 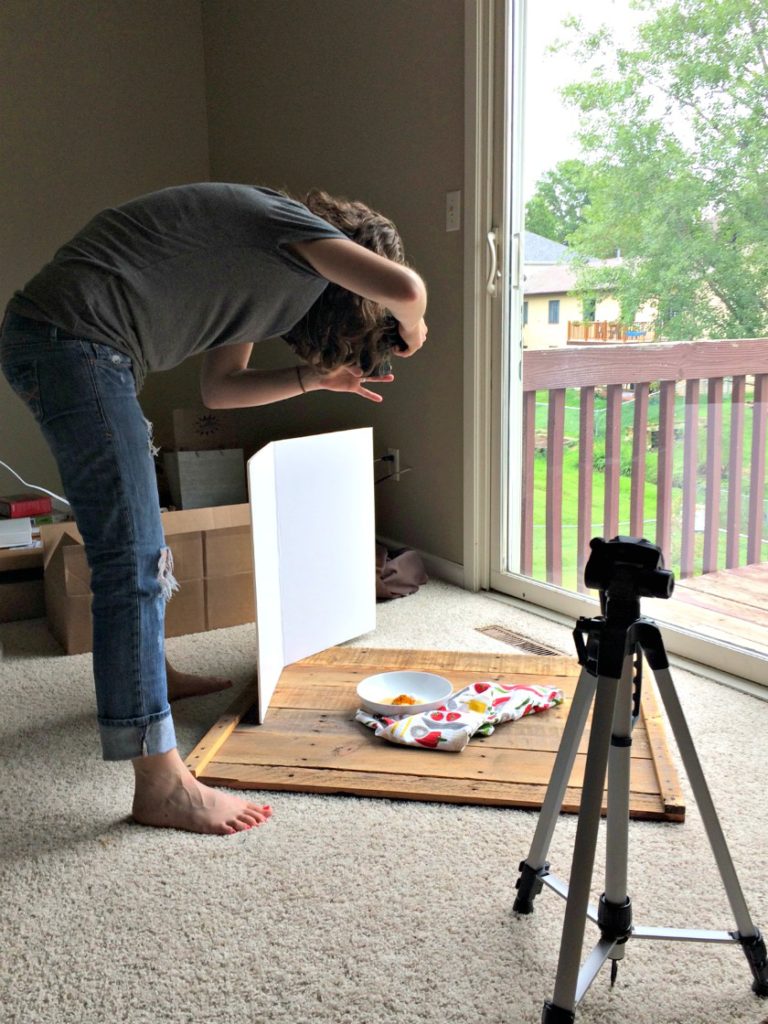 Apparently the tator gave me the energy I needed to get my butt to work.  I photographed my go-to nightshade-free taco seasoning, which I’ll be sharing with you later this week.  I’m still experimenting with my favorite photography spot in the new house.  Apparently at 4:00, the living room is the brightest spot. 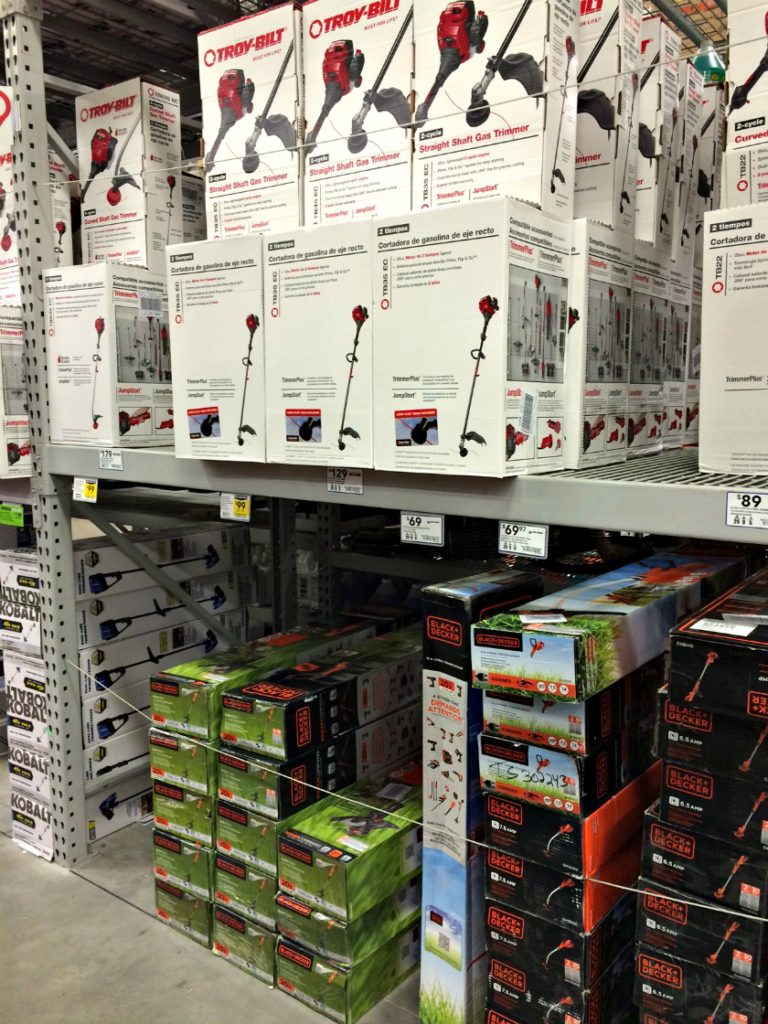 Once the job was done, we decided to go do some more adulting.  Like heading to Lowe’s and picking out a weed wacker and various other things we needed for the house.  Spending $250 on yard and house projects is not my idea of fun. 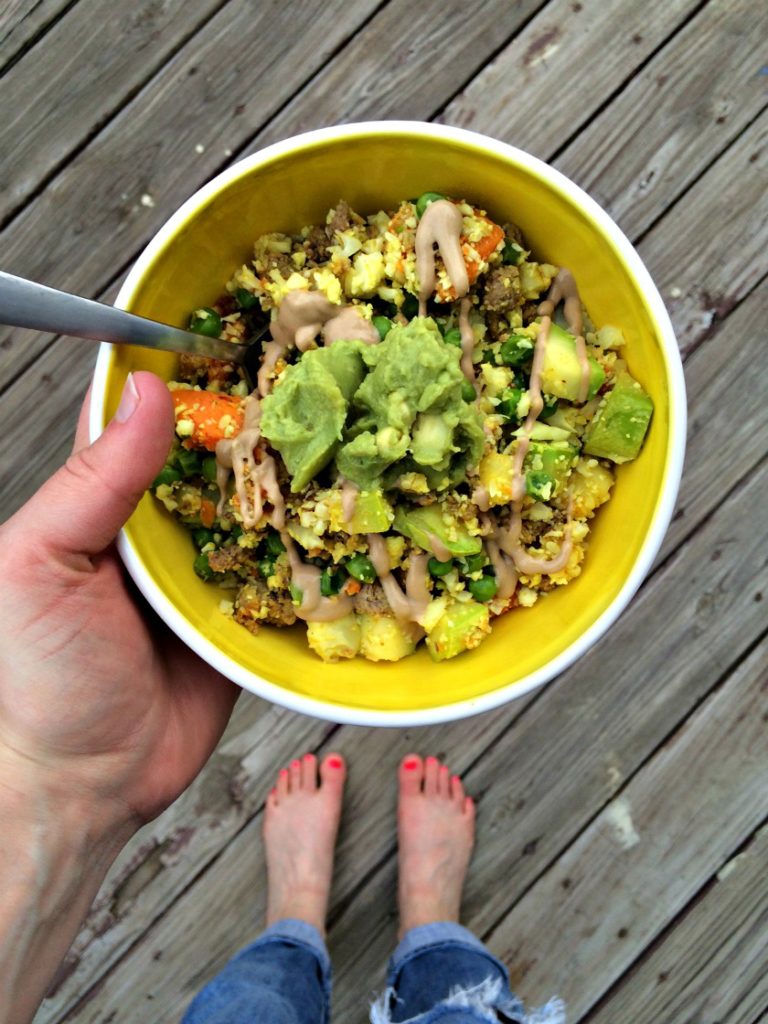 I made dinner as soon as we got home because I was starving.  I hope to share a more detailed post about this later, but the general concept was ground turkey, cauliflower rice, zucchini, frozen veggies, spices, Dijon mustard, and guac. 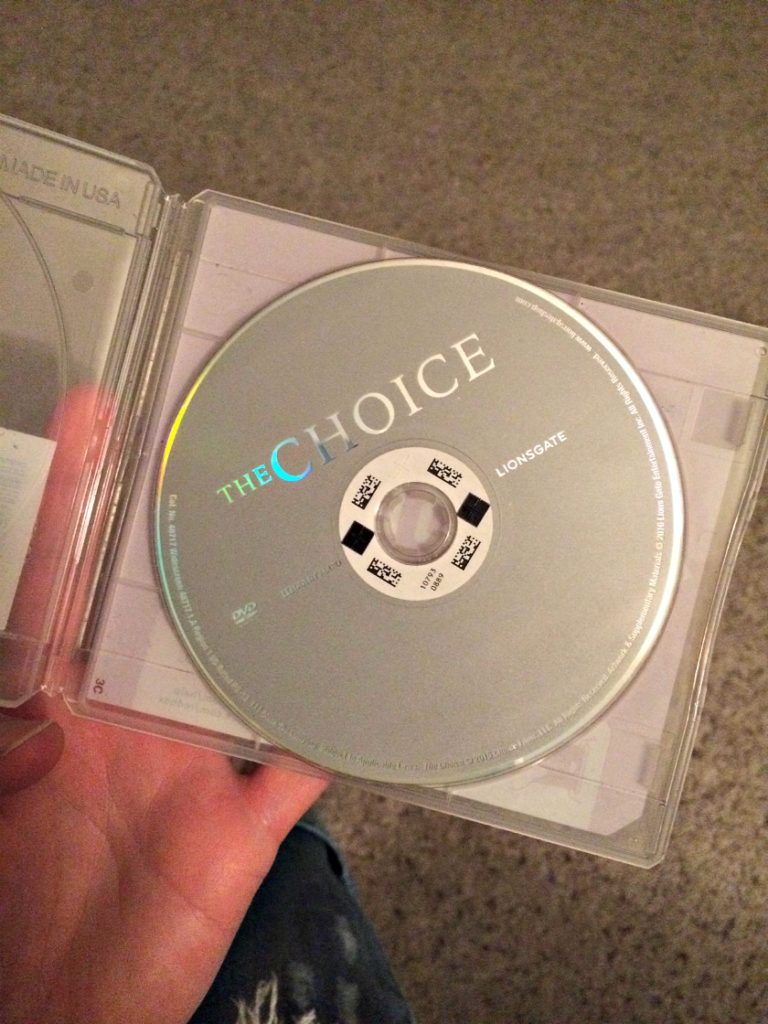 Afterwards we snuggled up on the couch and watched The Choice.  A couple of rice cakes topped with sunflower seed butter definitely happened, too.  I always need a snack before bed.